The New Year at the Ecumenical Patriarchate

Print The New Year at the Ecumenical Patriarchate
Mail 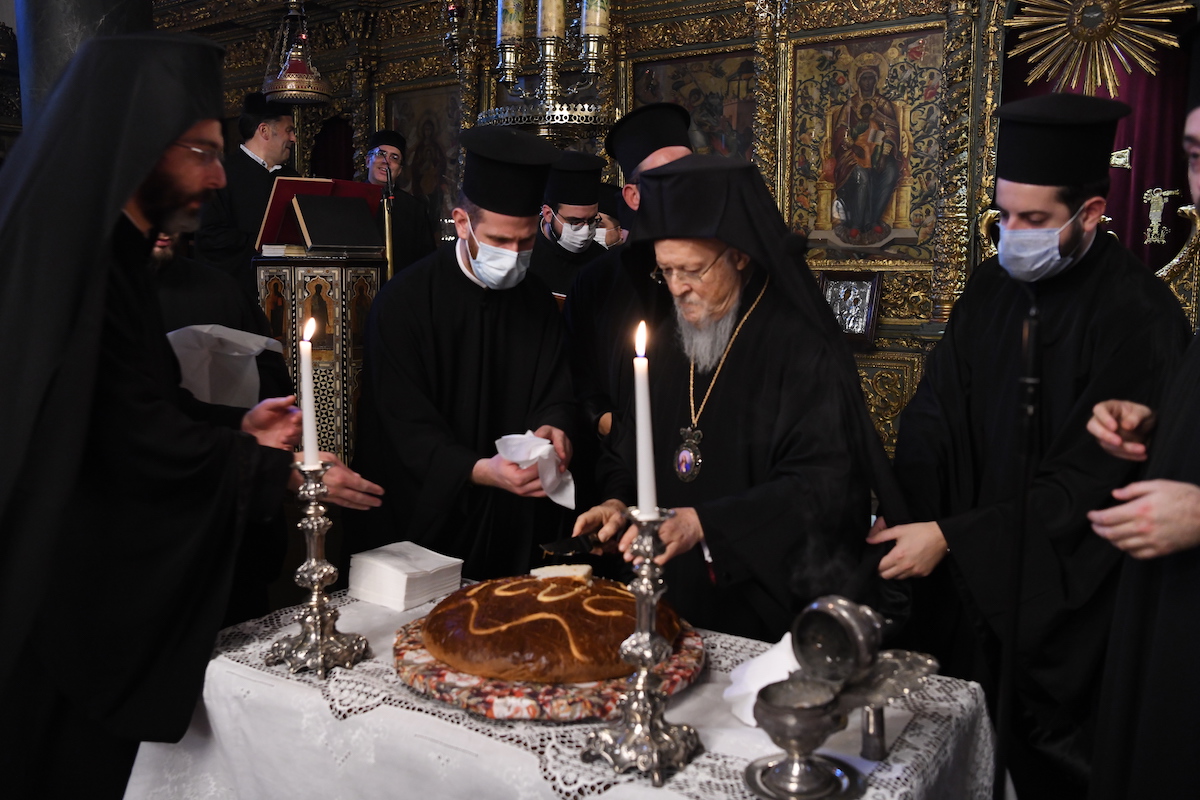 His All-Holiness Ecumenical Patriarch Bartholomew presided from the Throne on the morning of the First Day of the New Year 2021, during the Divine Liturgy for the feast of the Circumcision of the Lord and the memory of Basil the Great, at the Patriarchal Church in the Phanar. Concelebrating were Their Eminences Metropolitans Apostolos Geron of Derkon, Meliton of Philadelphia, Chrysostomos of Myra, Stefanos of Kallioupolis and Madytos, and Athenagoras of Kydonia.

Present were the Consul General of Ukraine in Istanbul, the Honorable Mr. Oleksandr Gaman, along with his family and a small number of believers, due to travel restrictions as part of anti-pandemic measures.

His All-Holiness then accepted the good wishes of the Hierarchs and the Consul General of Ukraine in the Auditorium of the Eugenides Palace.

On the eve of the feast, Thursday, December 31, 2020, His All-Holiness presided from the Throne during Vespers, which was concelebrated by their Eminences Metropolitans Apostolos Geron of Derkon, Demetrios Geron of the Princes’ Islands, Germanos of Tranoupoli, Meliton of Philadelphia, Irenaios of Myriophytos and Peristasis, Chrysostomos of Myra, Gennadios of Sassima, Stefanos of Kallioupolis and Madytos, Athenagoras of Kydonia, and Maximos of Silyvria.

Immediately afterwards, in the Auditorium of Eugenides, the Ecumenical Patriarch accepted the good wishes of the Hierarchs and diplomats and blessed the Holy Vasilopita, the coin of which went to the God-loving Bishop Benjamin of Tralles.

“The Holy Great Church of Christ stands today before the rising new year, grateful and hopeful,” said His All-Holiness, among other things, in his address, and referred to everything that happened in 2020.

“The passing year was also for the Church, as it was for the whole world, a year of extraordinary and unexpected events, due to the encroachment of the deadly pandemic, always testing us in various ways. But this hope in God did not fail. He does not negate the trust of His children in Him, and keeps His covenant with us: ‘I have loved you, because you have kept my word of patient endurance, I will keep you from the hour of trial’ (Rev. 3:10). We will not allow ourselves to be tempted, nor will we ignore this when we need reinforcement and help, so that it will not be provided to us. “Do not be tempted, but God gives the strength to overcome temptation,” so that “with the temptation He will also provide the way of escape, that you may be able to endure it” (I Cor. 10:13).

“With the certainty, then, that ‘God is faithful’ and that ‘Jesus Christ is the same yesterday and today and forever’ (Heb. 13:8), we pass the threshold of the rising new year. On this glorious occasion, we wish to express our heartfelt gratitude to you, beloved brethren in Christ, the coworkers of Our Modesty in our heavy work, with whom, in a sacred shared responsibility and sincere harmony, we try to direct ecclesiastical matters for every good outcome and solution, for the glory of the name of the Lord and the further strengthening of this all-holy Throne. And we are not talking only about the holy brethren of the Patriarchal Synod, but about the whole of the resident Hierarchy, with which we cooperated most efficiently during the end of the year in the meetings we convened to deal with the pastoral issues raised by the coronavirus pandemic.

“But we also honor and praise the contribution of the laity, especially the Most Honorable Archons Offikion of Holy Great Church of Christ, for their stewardship of the affairs of the Omogeneia here. We honor and praise them as devoted and contributing to the strengthening and increase of our immediate flock in this City, especially of our young people. It would be an omission if we did not mention at this moment the decision to move to next autumn the Congress of all Orthodox young people in Turkey, regardless of language or ethnic origin, which was scheduled for 2020, a ‘year of pastoral renewal and care for the youth,’ but the health crisis did not allow its implementation. We hope that, with the blessing and grace of God the Giver, the epidemiological data will allow us to do so in the new year.”

Previously, the Rev. Archimandrite Joachim, Chief Secretary of the Holy Synod, read the text of the address of His Eminence Metropolitan Konstantinos Geron of Nikaia, as an expression of respect for the Hierarchy of the Throne, who due to illness could not attend in person.

In his response, His All-Holiness referred again to the pandemic that marked 2020 and to its effects on everyone’s daily life.

“Last March, the Ecumenical Patriarchate, with a high sense of responsibility towards its faithful and towards all people without exception, decided to suspend for three months all religious services in its provinces, as well as the operation of the Patriarchal Offices in the Phanar, where we continued to perform, as a Monastic Brotherhood, the sacred services behind closed doors. Holy and Great Lent and Holy Week, as well as the celebration of Holy Pascha, were an unprecedented experience for all of us, in the fullness of contemplation and divine peace in the Patriarchal Church, except without the presence of believers.

“However, despite the restrictive measures of social distancing, we have all come closer through the online transmission of the sacred services from our holy Center, and our prayers have been united with those of the children of the Holy Great Church of Christ and beyond. We take this opportunity to paternally congratulate all of you clerics of the Patriarchal Court, beloved children, for the good witness of the solemn and respectful performance of the sacred services, according to the tradition of chant of the Patriarchal Church. You have, indeed, taught lessons about the liturgical ethos and the modest, austere and giving style of the Phanar, and you deserve the just praise of the Mother Church and our personal satisfaction.”

Referring to the hopes of all, on the occasion of the new year, His All-Holiness pointed out that these “do not depend only the vaccine, the distribution of which has begun and which promises the reduction and termination of the deadly disease; nor do they depend only on ourselves or upon our abilities, but on the living and true God, Who is the secure support of life and hope that can never be denied.” Elsewhere in his address, he emphasized:

“May He shower His blessings and gifts in the new year upon all of us serving under this sacred roof, so that we may continue to hold high the name of the Great Church, above all, after the name of Christ the Savior, to hold it high in the eyes of the whole world, which looks to the humble Phanar and sees in it a sacred symbol, an expression of eternal and indestructible values, a Church with a long and glorious tradition.”

The Ecumenical Patriarch then blessed and cut the Holy Vasilopita of the Court, the coin of which went to the Archon First Domestic Mr. George Bakopoulos.

The Ecumenical Patriarch honored the memory of his predecessor Basil III

In memory of St. Basil, His All-Holiness the Ecumenical Patriarch went to the Holy Monastery of Zoodochos Pigi Valoukli, where his predecessor Basil III (1925-1929) rests in the expectation of the common resurrection, and prayed the Trisagion for him, mentioning also the late Elassonos Vassilios and Apameias Vassilios, who served as Abbot of the Monastery.