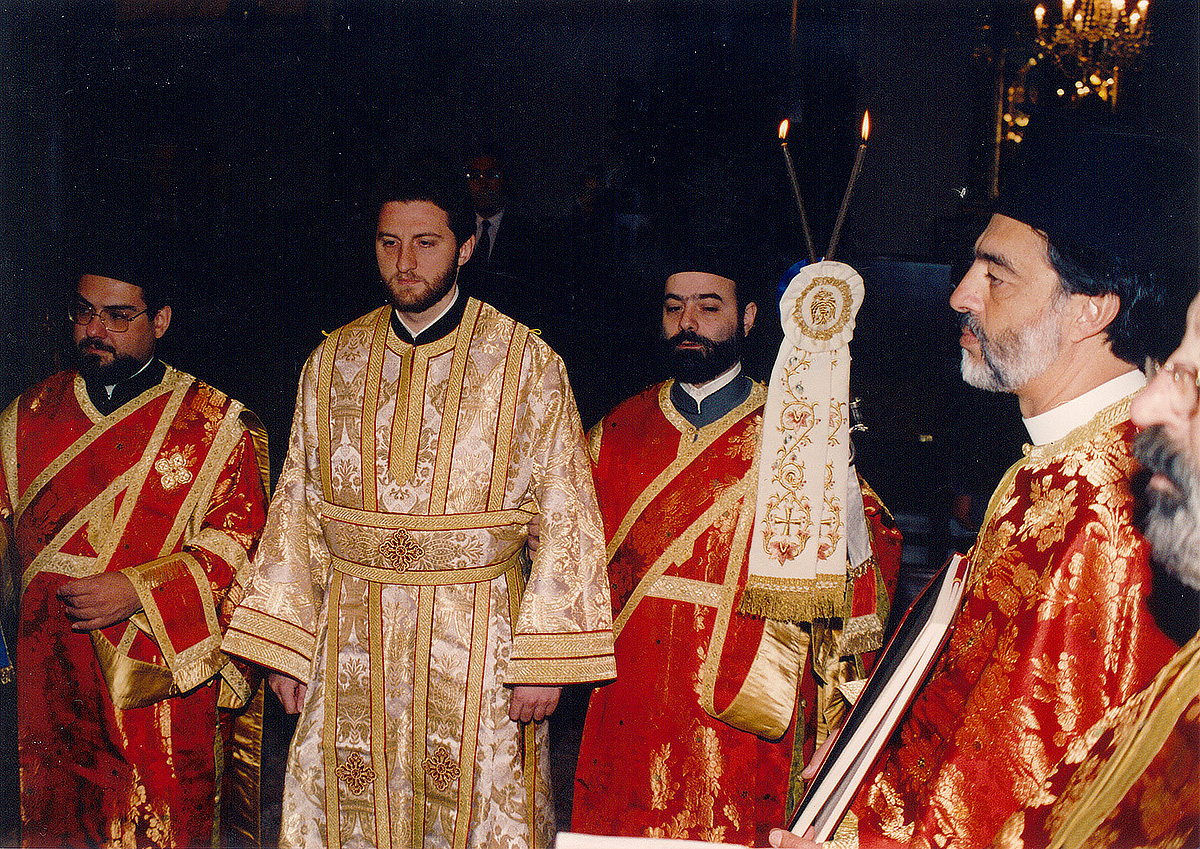 Archbishop Elpidophoros ordained a deacon on April 17, 1994. The deacons were the current Metropolitans Theoleptos of Iconium and Tarasios of Buenos Aires. Protopresbyter Alexander Karloutsos is at right.

In an interview with the “National Herald,” Metropolitan Theoleptos of Iconium, one of the chief hierarchs of the Ecumenical Patriarchate and a close associate of Patriarch Bartholomew, describes Archbishop Elpidophoros of America, whom he has known since they were students, as a “charismatic and talented clergyman.”

He also said that he foresaw that one day he would attain such a high level. The following is the interview:

“National Herald”: Thank you, Your Eminence, for the opportunity to talk about the holy Archbishop of America, Elpidophoros. Let’s start with the question of where, when and how you met him; do you remember?

Metropolitan Theoleptos: I thank you warmly, Mr. Kalmoukos, for giving me the opportunity to talk about the holy and beloved brother, Elpidophoros of America. I met him on Mount Athos when he was still a student at the Theological School of the Aristotle University of Thessaloniki. I was recommended by the Metropolitan and by the Ecumenical Patriarch Bartholomew, with whom we were officially on Mount Athos. He knew him.

I remember telling me that “after his studies he will come to serve in the Patriarchate.” The second time I met him was when, as a second deacon, I accompanied our Patriarch to a choir of his in the holy church of St. Paraskevi in Kazlicesme, where the Patriarch received a German group and call him in to be translator. The background of the holy Archbishop of America (who comes from Macrohori in the historical Metropolis of Derkoi, of which I am a scion) led me to approach him.

“NH”: I saw in the photos that you served at his diaconal ordination with the current Metropolitan of South America, Tarasios.

Theoleptos: That is true, at his diaconal ordination, in 1994, the holy Metropolitan of Buenos Aires, Tarasios, served as tertiary, and my inferiority as secondary, among the Patriarchal deacons.

“NH”: What are your thoughts today about Elpidophoros being the Archbishop of America?

Theoleptos: As you know, the Archdiocese of America is the largest and most important province of our Ecumenical Patriarchate abroad. And the concern of both our Patriarch and our Patriarchate in general is great and sincere for this great Province.

Its flock is a pious people, close to the Church, people who, away from their homeland, are trying to remain faithful to Orthodoxy and the customs and traditions of our People and our Race. Thus the Ecumenical Patriarchate always made sure that the hierarchs of this province were remarkable hierarchs of the Throne, as were, for example, the blessed Archbishop Athenagoras, (later Ecumenical Patriarch Athenagoras I) and Iakovos Koukouzis, who also elevated the Archdiocese of America.

The new Archbishop of America, Elpidophoros, is the best our Patriarchate had to offer from his hierarchy to the Archdiocese of America. And that is precisely what the Patriarch’s interest in and love for those in the Archdiocese is.

Although there is a shortage of people born in Constantinople and with Turkish citizenship, our Patriarch did not hesitate to propose to the Holy and Great Synod the Metropolitan Elpidophoros of Proussa, and I repeat, as the most suitable for this position, while he could have kept him here for the needs of the Patriarchate.

“NH”: Did you predict that one day Elpidophoros would ascend to such a high level?

Theoleptos: I admit that I did. The new Archbishop since the early years of his ministry in the Patriarchal Court has shown himself to be a charismatic and talented clergyman.

“NH”: How would you describe him? What kind of man is he?

Theoleptos: Describing a talented and charismatic man, such as your new Archbishop, is difficult, dear Mr. Kalmoukos, because there is always the fear that you might not do him justice. Nevertheless, I will attempt it, and I will tell you that the holy Archbishop of America, Elpidophoros, is a man of faith in God, with love and devotion to our Ecumenical Patriarchate and to our Patriarch.

He is a man with an immense theological education, a linguist, knowledgeable about the ecumenical movement, a man of dialogue, of every dialogue, with love for his fellow man, with dedication to his duty, laborious, systematic; whatever the Church has entrusted to him so far, he has done in the best way.

He has experience in management. He demonstrated this as an Archbishop, as Metropolitan of Proussa, but above all as abbot of the Monastery of the Holy Trinity of Halki, where there is also the historic Theological School.

He manned the holy Monastery, in a short period of time, with new people whom he chose, young, educated, and cultured, who not only manned the holy Monastery, but also filled priestly positions in the Archbishopric of Constantinople and in the Metropolises within the country and abroad. He organized, always with the permission and blessing of our Patriarch, various conferences at the Theological School of Halki with theological and ecological content, and successfully hosted musical concerts featuring well-known great musicians, as well as exhibitions, etc.

The holy Archbishop of America is a laudable clergyman because everything that he has acquired, education, character, communication, diligence, he owes only to himself. It does not come from his home, or from a wealthy family of note.

He is a child of simple, hardworking parents. He worked, tiring himself out, without the help of anyone; on the contrary, he continued in spite of many difficulties that tested him and proved the talents given to him by God, his gifts and abilities, and thus he won the love and confidence of our Patriarch, as well as most of the hierarchs of the Throne. And today, with the blessing of God and the love of our Patriarch, he holds this high rank of Archbishop of America. He is a bold, brave and determined man.

“NH”: What do you think the Church and the United States of America should expect?

Theoleptos: The local Church and the United States of America should expect their Archbishop to work and return the holy Archdiocese again to the former glory that it had in the era of the late Archbishop Iakovos, which it unfortunately lost in the past 23 years, and I will dare to say, and surpass it, first, and secondly, as he himself says, restore the Archbishopric and the Ecumenical Patriarchate.

These things will, of course, be done on his own initiative, but also with the cooperation and support of the people of the US. And then I’m convinced that he will succeed. He is willing and determined to work for the sake of the Archdiocese, the people, and our Patriarchate.

“NH”: What would be some of the brotherly advice that you would give him?

Theoleptos: I do not think he needs any advice. He is also a graduate of the University of the Phanar, and has 25 years of experience, which he has acquired from the positions he has held in the court of the Phanar up until today. All I want to ask him is to be who he is. Keep that, which I described before.

“NH”: How do the Patriarch, the hierarchy and the other fathers feel in the Phanar about his reception and enthronement?

Theoleptos: I would not like to say how the hierarchs and the other fathers feel in the Phanar. But what I can tell you with certainty is that our Patriarch, with whom I have spoken, is happy and satisfied with the promising messages arriving at the Phanar from New York and with the affection of the pious flock of the United States for their new prelate. Of course, I am very happy and proud of my holy brother of America.

I pray that God will give him strength and patience to deal with the great problems he has inherited, and enable him to carry out the work commissioned by our Ecumenical Patriarchate.