The Thronal Feast of the Ecumenical Patriarchate

Print The Thronal Feast of the Ecumenical Patriarchate
Mail 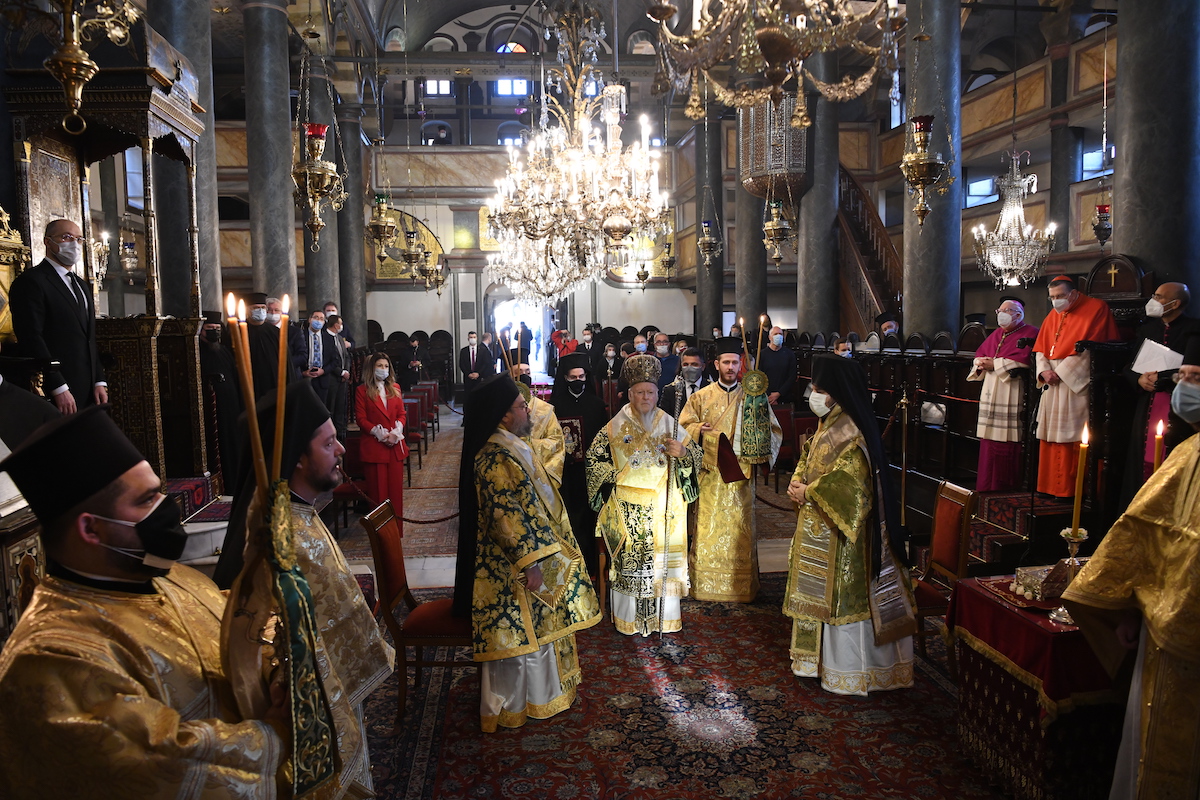 The First-Throned Church of Constantinople honors Its founder, the Holy Apostle Andrew the First-Called – with Representatives of the Church of Rome and the Prime Minister of Ukraine

In a festive atmosphere, the Ecumenical Patriarchate honored the memory of Its founder, the Apostle Saint Andrew the First-Called. Today, Monday, November 30, 2020, the Divine Liturgy was celebrated by His All-Holiness Ecumenical Patriarch Bartholomew, with the participation of Their Eminences Metropolitan Theoleptos of Iconium and Maximos of Sylivria.

During the Divine Liturgy, a Delegation of the Church of Rome was present under the leadership of His Eminence Kurt Cardinal Koch, President of the Pontifical Council for the Promotion of Christian Unity.

Their Eminences Metropolitans Apostolos, Geron of Derkon, Dimitrios, Geron of the Princes’ Islands, Meliton of Philadelphia, Irenaios of Myriofytos and Peristasis, Chrysostomos of Myra, Stefanos of Kallioupolis and Madytos, and Athenagoras of Kydonia; His Eminences Archbishop Nektarios of Anthidonos, Commissioner of the Holy Sepulcher in Istanbul; the God-loving Bishops Adrianos of Alikarnassos, Benjamin of Tralles and Smaragdos of Dafnousia; the Delegation of the Autonomous Orthodox Church of Finland, consisting of the Rev. Archimandrite of the Ecumenical Throne Sergios, Abbot of the Holy Monastery of New Valamo, and the Rev. Protopresbyter Timo Tynkkynen; His Excellency the Prime Minister of Ukraine, Mr. Denys Shmyhal; accompanied by Ministers and high-ranking officials of his Government, Archons Offikion of the Great Church of Christ; the Honorable Consul General of Greece in Istanbul Mrs. Georgia Sultanopoulou, teachers of the Greek Schools, and faithful from Istanbul, observing the sanitary measures to prevent the spread of the pandemic.

The homily of the day was offered by the Rev. Archimandrite Joachim, Chief Secretary of the Holy Synod.

At the end of the Divine Liturgy, the Ecumenical Patriarch addressed the official Delegation of the Church of Rome, expressing his gratitude and that of the Church of Constantinople and himself to His Holiness the Pope of Rome, for the presence of his representatives at the Thronal Feast of the Ecumenical Patriarchate, despite the difficulties still posed by the Covid-19 coronavirus pandemic.

“Due to this health crisis, for the first time in more than five decades, it was not possible to send the official Delegation of the Ecumenical Patriarchate to the Thronal Feast of the Sister Church of Rome in June. For this reason, the meeting of the Coordinating Committee of the Joint Committee on the Theological Dialogue between the Orthodox and the Roman Catholic Church, scheduled for last September, did not take place. Nevertheless, as informed by the authorities, the elaboration of the relevant text is progressing, and we hope that, God willing, the Coordinating Committee will convene in the coming year of 2021, so that we can proceed quickly to the convening of the plenary session of the Dialogue Committee.”

His All-Holiness then pointed out that the difficulties that periodically appear in the ongoing theological dialogue between Roman Catholics and Orthodox are related to the complexity of the issues discussed, “which for many centuries have occupied and divided both the Church and theology.”

“We move beyond all theological minimalism and ecumenical utopianism, with realism and confidence in the providence of God. The will to walk steadily towards the coveted unity remains intact, at the command of the leader of our faith. On the other hand, this was also confirmed by the Holy and Great Synod of the Orthodox Church, according to which a common goal in theological dialogues is ‘the final restoration of the true faith and the love of unity.’ Differentiation in the observed methodology is allowed only so long as this is imposed by the special nature of the problems of a bilateral dialogue, while ‘the purpose is the same in all dialogues’ (Relations of the Orthodox Church to the Christian world, §12).

“Of particular importance to us is the fact that the ‘dialogue of truth’ in love, which has completed forty years of life and fruitfulness this year, is accompanied by initiatives for common witness in the world against the modern thorny problems of the Gospel, the model of humanity renewed in Christ, in mutual trust and good cooperation.”

The Ecumenical Patriarch stressed that with His Holiness Pope Francis he has common concerns and common sensitivities, and also identical views to address the great challenges of our time.

“We support initiatives that promote peace and reconciliation. We emphasize the philanthropic message of the Church for the promotion of brotherhood and solidarity, social justice and respect for human rights. We are participating in the effort to address the causes and consequences of the great contemporary refugee and immigration crisis. We are shocked by the often tragic incidents of violence in the name of God and religion. These things lead us to rediscover the value of interfaith dialogue, peace and co-operation between religions in avoiding such extremes and attitudes, in overcoming mistrust and in consolidating mutual respect.

“The recent Encyclical of His Holiness Pope Francis Fratelli Tutti highlights in a striking way the multidimensional concerns of the Church of Rome in the face of great social challenges. Our Modesty commissioned a group of reputable Orthodox theologians three years ago to compile a text, on the basis of the positions formulated by the Holy and Great Synod of Orthodoxy, based on theological assumptions, positions on social ethics in the Orthodox Church, a text which was published in print and online during the last March under the title For the Life of the World. The social ethos of the Orthodox Church has already provoked a fruitful debate.”

His All-Holiness then added that today moral and anthropological problems have become very relevant, “so that there is talk of a ‘paradigm shift’ in the ecumenical arena.”

“Obviously, it is not permissible to reduce pluralism to the value of nihilism, which greatly threatens social cohesion, leading both to a disintegration of the Christian identity and a dimension in ecclesiastical life. It is not possible for the Church of Christ to accept ‘parallel monologues’ and a ‘cohabitation of opposites’ within it, nor to adapt its divine moral and anthropological principles to the ‘alternative choices’ of modern secular civilization. The life of the Church itself is an indestructible answer to the questions of anthropology and ethics. The gap that is being created in the ecumenical field, and which is constantly deepening in these areas, hinders the progress of inter-Christian dialogues.

“In this spirit, we believe that the formulation of a commonly accepted Christian anthropology and the practical respect for its principles will be an important support for the course of relations between our Churches. Then we will walk in a dialogue of love and truth, but also in a ‘dialogue of life,’ living renewal and freedom in Christ and giving a reliable common witness in the world about our hope.”

The Ecumenical Patriarch Bartholomew also referred to his recent meeting with Pope Francis, last month in Rome, noting that “every face-to-face meeting with our brother Pope Francis is a special experience of brotherhood, which strengthens the desire and the struggle of both of us for the progress of the path towards the common Eucharistic Cup.”

Concluding his address, the Ecumenical Patriarch noted that the Thronal Feast of the Church of Constantinople is a common holy day of the Church of Rome, since their founders, the brothers Andrew and Peter, met Jesus together in person and recognized Him as the Messiah and Savior of the world.

“After these thoughts and in a festive spirit, we cordially address you, ‘as you are present’ with us on this glorious day, wishing you a speedy overcoming of the dangerous pandemic and effective confrontation of its social and economic consequences. We owe to the merciful God, as ambassadors of His Holy Apostles, as the brethren and imitators of the cross of His passion and founders of our Churches Andrew and Peter, to bless His people and all of us in the witness and ministry of the Gospel of salvation, so that His holy name may be glorified. Amen.”

Cardinal Kurt Koch then read a message from Pope Francis in English, in which he expressed his warm wishes to the Ecumenical Patriarchate for the feast of its patron saint, the Apostle Andrew.

“I fondly remember the presence of Your All-Holiness at the International Peace Meeting held in Rome on October 20, with the participation of representatives of various Churches and other religious traditions. Along with the challenges posed by the current pandemic, war continues to plague many parts of the world, with new armed conflicts emerging, taking the lives of countless men and women. Undoubtedly, all initiatives taken by national and international entities to promote peace are useful and necessary, but conflict and violence will not stop until all people are deeply aware that they have a mutual responsibility as brothers and sisters. In this light, the Christian Churches, along with other religious traditions, have a primary duty to provide an example of dialogue, mutual respect and practical cooperation.”

In his message, His Holiness Pope Francis stated that he had experienced this spirit of brotherhood during the various meetings he had with His All-Holiness, and recalled that the Ecumenical Patriarchate, before the other Churches, with the Synodal Circular of 1920, had expressed desire for greater closeness and understanding among Christians. He noted that the relations between the Churches of Rome and Constantinople have developed greatly during the last century, as the two Churches keep alive the desire to achieve the goal of restoring full communion through participation in the common Eucharistic altar. “Although obstacles remain, I am confident that by walking together in mutual love and continuing the theological dialogue, we will achieve this goal,” said Pope Francis, among other things.