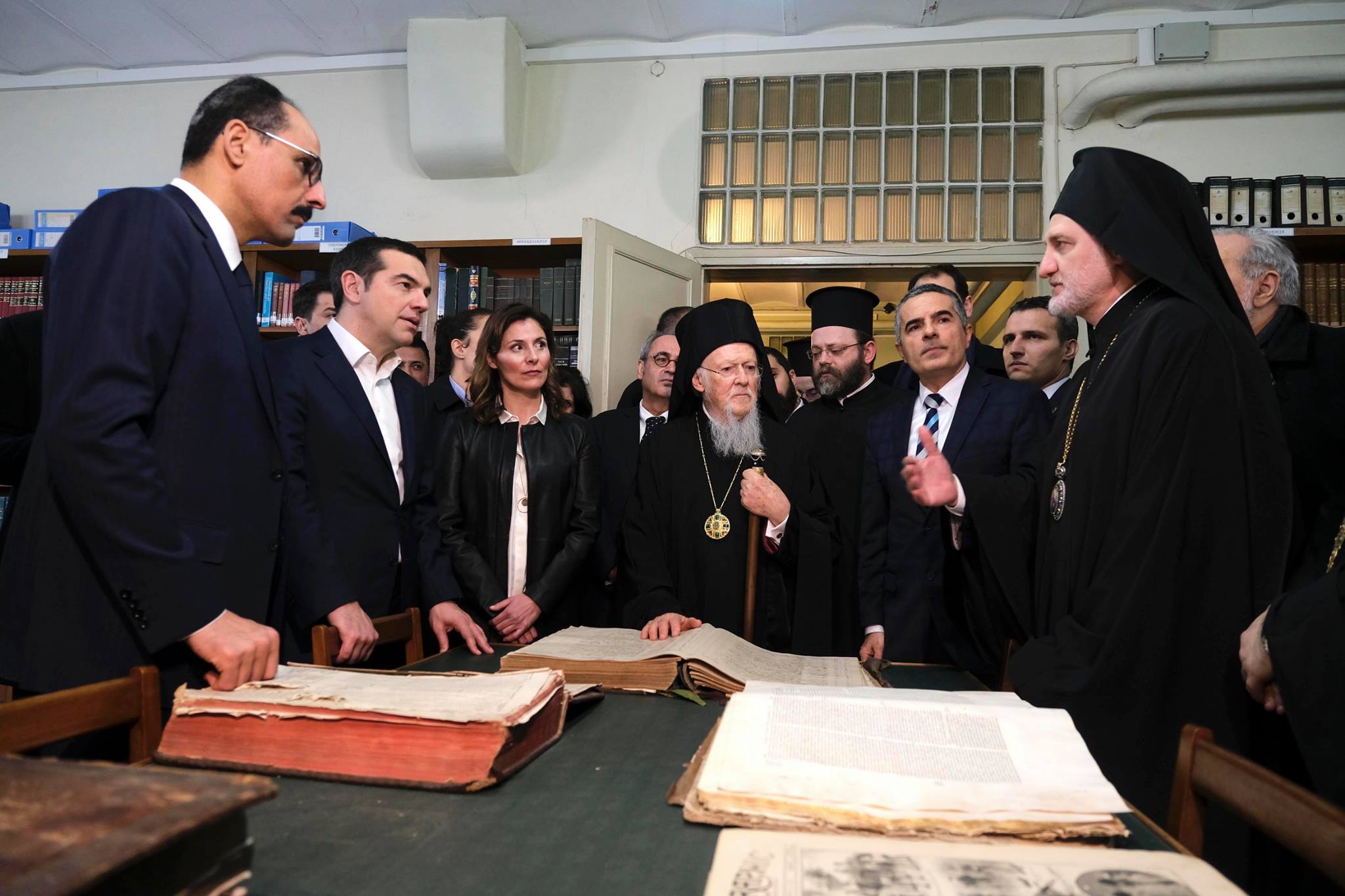 His All-Holiness Ecumenical Patriarch Bartholomew and Prime Minister Tsipras listen to Metropolitan Elpidophoros, Abbot of the Halki Holy Trinity Patriarchal and Stavropeghial Monastery, explain about the digitization process of over 100,000 books.
© facebook.com/tsiprasalexis

“We welcome you with joy and exultation in this historic place and thank you for your participation in this meeting,” said His All-Holiness, who attended the Halki Theological School, as he welcomed Tsipras there. Tsipras became the first serving Greek Prime Minister to visit the seminary. The visit fell on the Feast Day of St. Photios, Ecumenical Patriarch of Constantinople, who was the founder of the Monastery of the Holy Trinity, where the Halki Theological School is located.

“The times are changing, but the mission of the Church of Christ remains unchanged and unaltered, founded on rock,” His All-Holiness stated. He also made a special reference to the granting of autocephaly to the “crucified” Ukrainian people. He noted the fact that Greece had always supported ending the injustice against the School and the Ecumenical Patriarchate, in the hope that the day would not be delayed that the School would again open its gates.

The Ecumenical Patriarch, who has worked for many years for the reopening of the School, expressed the hope that the time would soon come “to experience the reopening of the School,” adding that Orthodoxy for 48 years “has lacked the joyful fruits of this spiritual nursery.…Unfortunately, in the past 48 years, we have been celebrating this day without our professors and without the students.”

For his part, Tsipras expressed his confidence that “the next time I cross this threshold, I will discuss the reopening of the Theological School of Halki with President Erdogan.”

“The reopening of the Theological School will not be a message of disunity, but of friendship, mutual understanding and brotherhood between the two peoples,” the Greek Prime Minister said.

Tsipras expressed the hope that the reopening of the school “will not be far….I want to believe we are near the day when these halls will once again ring with the happy laughter of students.”

Tsipras began the meeting by first thanking Ecumenical Patriarch Bartholomew “for a tour of this historic place that has been attended by young students who at an early age came to study in a school attended by great people, scholars, Orthodox priests.”

He characterized the Library of the Theological School as an ark of wisdom and knowledge. “On the occasion of my presence here, I had the pleasure of discovering that our presence in Halki was not the object of discord, but of hope, joy, and a positive response from the ordinary Turkish citizens of this historic place, who have greeted us and expressed their sincere love, and this is the yeast of the Greek-Turkish friendship we want to build,” he added.

“Today’s meeting is giving the right messages, and I want to say that there are issues of disagreement between the two governments and the two countries that only we can deal with,” he added, adding: “The Turkish government has taken steps in the past few years, in particular on the issue of the property of the Ecumenical Patriarchate, and we are close to the day when these steps will become even more important.”

He also emphasized that “the Greek government supports the institution of the Ecumenical Patriarchate. I want to believe that your presence and contribution will be transformative, making it clear that religions are what unite people, not separate them.”