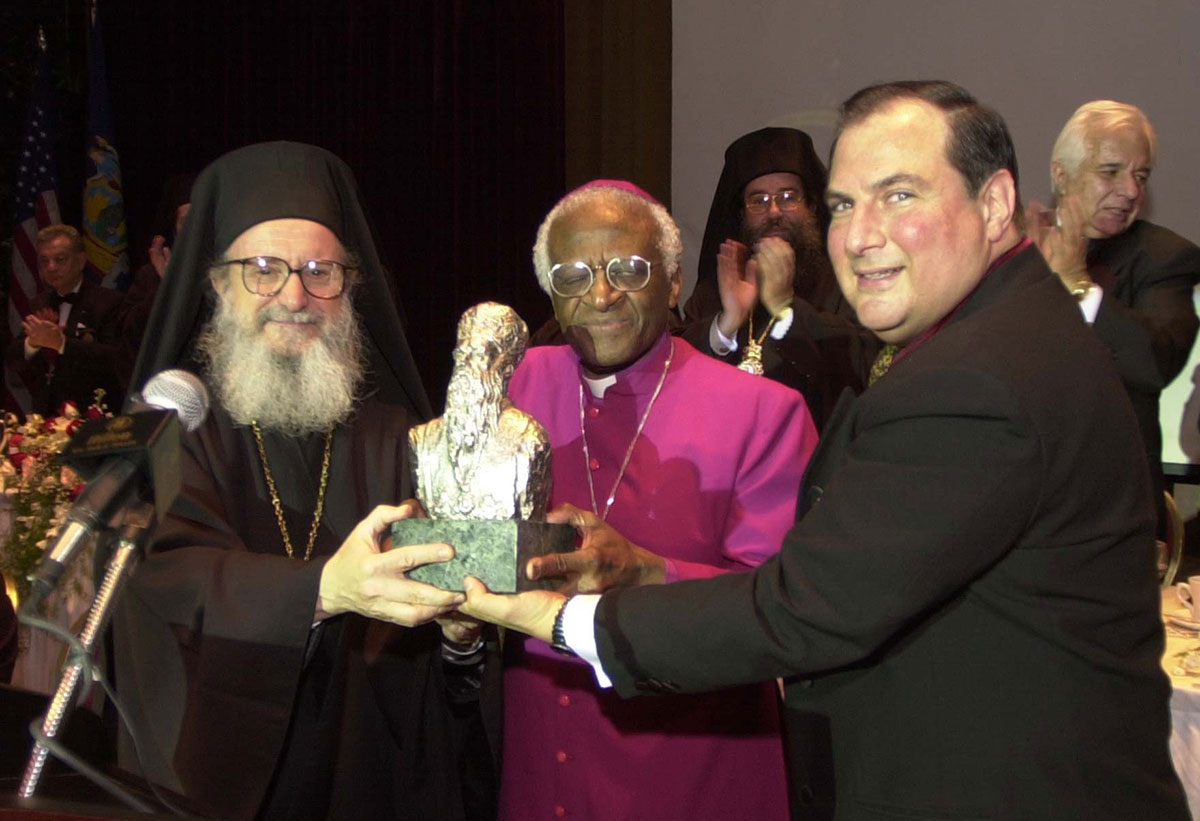 Nobel Peace Prize Laureate Archbishop Desmond Tutu, the recipient of the Athenagoras Human Rights Award for the millennium year 2000, passed away on December 26, 2021 at age 90.

One of the most iconic figures of the struggle to eradicate apartheid and promote religious freedom and human rights, Archbishop Desmond Tutu had a tremendous positive influence upon the conscience of South Africa and the entire world. A civil rights activist, clergyman, teacher, and author, Archbishop Tutu was presented the Athenagoras Human Rights Award by His Eminence Archbishop Demetrios of America and Dr. Anthony J. Limberakis, National Commander of the Order of Saint Andrew the Apostle, Archons of the Ecumenical Patriarchate, on March 4, 2000.

Archbishop Tutu was also awarded the 1984 Nobel Peace Prize in recognition of “the courage and heroism expressed by black South Africans in their peaceful methods in the fight against apartheid.”

Upon the passing of Archbishop Tutu, His Eminence Archbishop Elpidophoros of America stated: “Archbishop Desmond Tutu was a fearless fighter against apartheid. Throughout his life, he remained an apostle for racial justice, non-violence, and reconciliation. May his memory be eternal.”

Archon Commander Limberakis noted that “Archbishop Tutu was one of the great moral figures of our age. His was a unique prophetic voice for peace and justice; as a lone individual standing for what was right, he showed the power of the truth and stood as a living rebuke to those who behave as if might makes right. We would all do well to imitate his courage, his wisdom, and his perseverance in our own lives. Memory eternal!”

The Athenagoras Human Rights Award was established in 1986 by the National Council of the Order of St. Andrew the Apostle, Archons of the Ecumenical Patriarchate in America. The Award was named after one of the great Church leaders of the 20th Century, the late Ecumenical Patriarch of Constantinople, Athenagoras I. The Award is presented every year at the Annual Banquet of the Order to a person, group or organization that has consistently exemplified by action, purpose and dedication, concern for the basic rights and religious freedom of all people.