The Opening of the Stavropygion of the Ecumenical Patriarchate in Kyiv 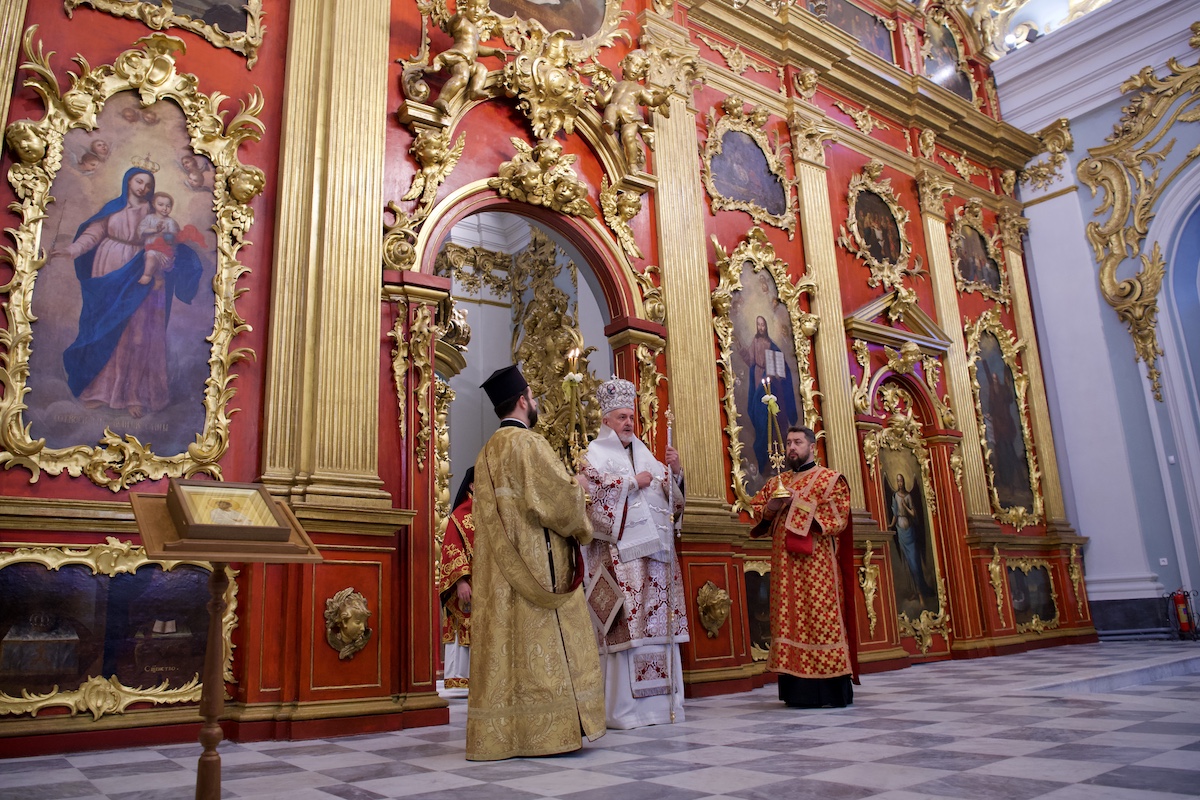 His Eminence the Metropolitan of France, the head of a Delegation of the Ecumenical Patriarchate, presided over the service of Agiasmos and the Divine Liturgy that followed

With the blessing of His All-Holiness the Ecumenical Patriarch Bartholomew, a Delegation of the Mother Church, consisting of His Eminence Metropolitan Emmanuel of France and the Patriarchal Deacon Iakovos Krochak, went to Kyiv for today’s celebration (according to the Julian calendar) of the memory of Saint Andrew the First-Called, whose name the Stavropygion honors. This historic Church was given to the Ecumenical Patriarchate by the Ukrainian State in 2018.

Before the Divine Liturgy, the traditional Agiasmos for the opening of the Stavropygion was performed. It is noted that the church is an eighteenth-century building and is an historical monument in modern Kyiv. After the Agiasmos, an Archieratical Divine Liturgy followed, which was celebrated by His Eminence the Metropolitan of France and concelebrated by His Eminence Archbishop Efstratios of Chernigov and Nizhyn and His Grace Bishop Michael of Koman, Exarch in Ukraine.

Among those present were the former President of Ukraine, His Excellency Mr. Petro Poroshenko, government officials, and MPs, as well as a representative of the Greek Embassy in Kyiv. In his address, His Eminence the Metropolitan of France referred to the person of Saint Apostle Andrew the First Called, the founder of the Mother Church of Constantinople.

“In the period before Christmas, our Holy Church ordains that we honor the sacred memory of the Holy and Glorious Apostle Andrew the First-Called, the brother of the First Apostle Peter, the one who said to Peter himself that ‘we have found the Messiah, which being interpreted is Christ.’

“And the Holy Great Church of Christ has ordained for centuries that we honor this First-Called Apostle to honor him and revere him as its founder in the lands of the city of Byzantium where he proclaimed the saving message of the Gospel of our Lord Jesus Christ. For this reason, we are particularly pleased that at the Stavropygion of the Ecumenical Patriarchate in Kyiv, in remembrance of the many Stravropygia of the Ecumenical Throne in Ukraine, the patron and overseer is this Holy Apostle, whose action and work are, according to tradition, also connected with these lands.

“We responded, therefore, with willingness and absolute obedience to the urging of His All-Holiness the Ecumenical Patriarch, to represent him at today’s feast and celebration, but also in the two-year anniversary of the Synod of Union, which formally requested the Autocephaly of the Church in Ukraine to be granted by the Mother Church, and which elected as its Primate His Beatitude Metropolitan Epiphaniy of Kyiv and All Ukraine.”

And His Eminence the Metropolitan of France continued:

“We see, reading history and various aspects of it, that the memory and the person of the Apostle Andrew are connected anyway with the witness of the land of Ukraine. When, in the waters of the nearby Dnieper River, Saint Vladimir received holy Baptism, performed in turn by the Equal to the Apostles for his compatriots, from the hands of envoys from Constantinople, he then became a link of a chain whose beginning, after Christ, was the Apostle Andrew, from whom the Mother Church was enlightened in the truth of faith.

“Mother and Daughter. A sacred and inviolable spiritual and canonical relationship. A story of love and sacrifice. A unity undisturbed as a matter of conscience. A reality which, as much as some today deny, they nevertheless cannot dispel. And through this Holy Patriarchal Stavropygion of Kyiv, I humbly declare in all directions that the Mother Church of Constantinople has always taken care of the stability of the local Orthodox Churches, and, in in fact, of those who received internal administrative independence from this sacred body. The existence of the Stavropygia everywhere and this historical responsibility of the Archbishop of Constantinople at the time to give Stavropegia everywhere, is the infallible witness of the strong unity of the ecclesiastical body and is by no means a departure, or open intervention or interference in the inner life and function of each of the Churches. That is, the Stavropygion is a sign of spiritual coexistence."

Afterward, the Metropolitan of France expressed his gratitude to His Eminence Archbishop Efstratios, the representative of His Beatitude Metropolitan Epiphaniy of Kyiv and All Ukraine, “for the joy of communion but also for the support of the Most Holy Church of Ukraine for this new Stavropygion and of the Exarch of His All-Holiness, the His Grace Bishop Michael of Koman, whom I congratulate fraternally for his recent promotion to the archieratical dignity, and for all his effort and struggle here in the place where he was placed by the providence of our Ecumenical Patriarch.”

His Eminence Metropolitan Emmanuel then stressed the importance of His All-Holiness’s upcoming visit to Ukraine, at the invitation of His Excellency President Volodymyr Zelensky. Concluding his speech, he expressed his gratitude, on behalf of His All-Holiness and the Mother Church, to the Director of the Museum of Hagia Sophia in Kyiv and her associates, who worked for the renovation of the holy church for about eleven years, and to whom he delivered Patriarchal Letters.

“With these cordial thoughts I praise the Name of the Triune God that this historic building was recently renovated by the care of the Ukrainian State and on behalf of His All-Holiness and the Mother Church. I also warmly thank especially Kukovalska Nelya Mykhailivna, Netudyhatkin Ihor Ana-toliyovych, and Yakovenko Ivan Vasyliovych, to whom I bestow the well-deserved praise and satisfaction of the Ecumenical Patriarch and the Church through his Seven Patriarchal Letters. Many years and blessings to all!”