Brothers and Sisters in our Lord Jesus Christ:

Many of you have been following the recent events regarding the Orthodox Church in Ukraine and the actions of His All-Holiness, Ecumenical Patriarch Bartholomew and the Holy and Sacred Synod of the Ecumenical Patriarchate.  In order to help you with an accurate understanding of the issues involved, we convey to you a brief memorandum.  This memorandum is the product of the pertinent research of leading scholars and fellow archons.

The Current State of the Church in Ukraine

The Orthodox population in Ukraine is divided into three groups: the Ukrainian Orthodox Church – Kyivan Patriarchate (“UOC-KP”) (25%/~11,000,000 adherents); Ukrainian Orthodox Church – Moscow Patriarchate (“UOC-MP”) (15%/~6,600,000 adherents); and Ukrainian Autocephalous Orthodox Church (“UAOC”) (1.8%/~ 790,000 adherents)[1].  This division started in the 1920s and was greatly complicated by powerful geo-political events. The twentieth century was a brutal era for the Ukrainian people.  During the Soviet period millions of Ukrainians perished under a ruthless regime. Historians estimate that in 1932-33, three to five million Ukrainians starved to death in the Holodomor(in Ukrainian, literally “death by starvation”). This genocide was orchestrated by Stalin to enforce collectivization in Ukraine. This catastrophe was followed by the heinous Nazi occupation of Ukraine during World War II.  Ukraine was the epicenter of what is referred to as the “Bloodlands” -- the territory which both the Russians and the Germans fought to integrate into their empires.  In the last 15 years Ukraine has experienced renewed strife with Russia.  In 2014 an international crisis arose when the Russian Federation, ignoring fundamental principles of international law and recognized tenets of national sovereignty, militarily occupied and annexed the Crimean peninsula in Ukraine and fomented civil war.

The division of the Orthodox population arises out of the Ukrainian people seeking an autocephalous church and their desire for “Ukrainianization” of their local church (i.e.,use of Ukrainian in church services and respect for local church customs).  To understand how these rifts have deepened and solidified in the last several years, a brief chronology of the relevant events during the late/post-Soviet period will be helpful. 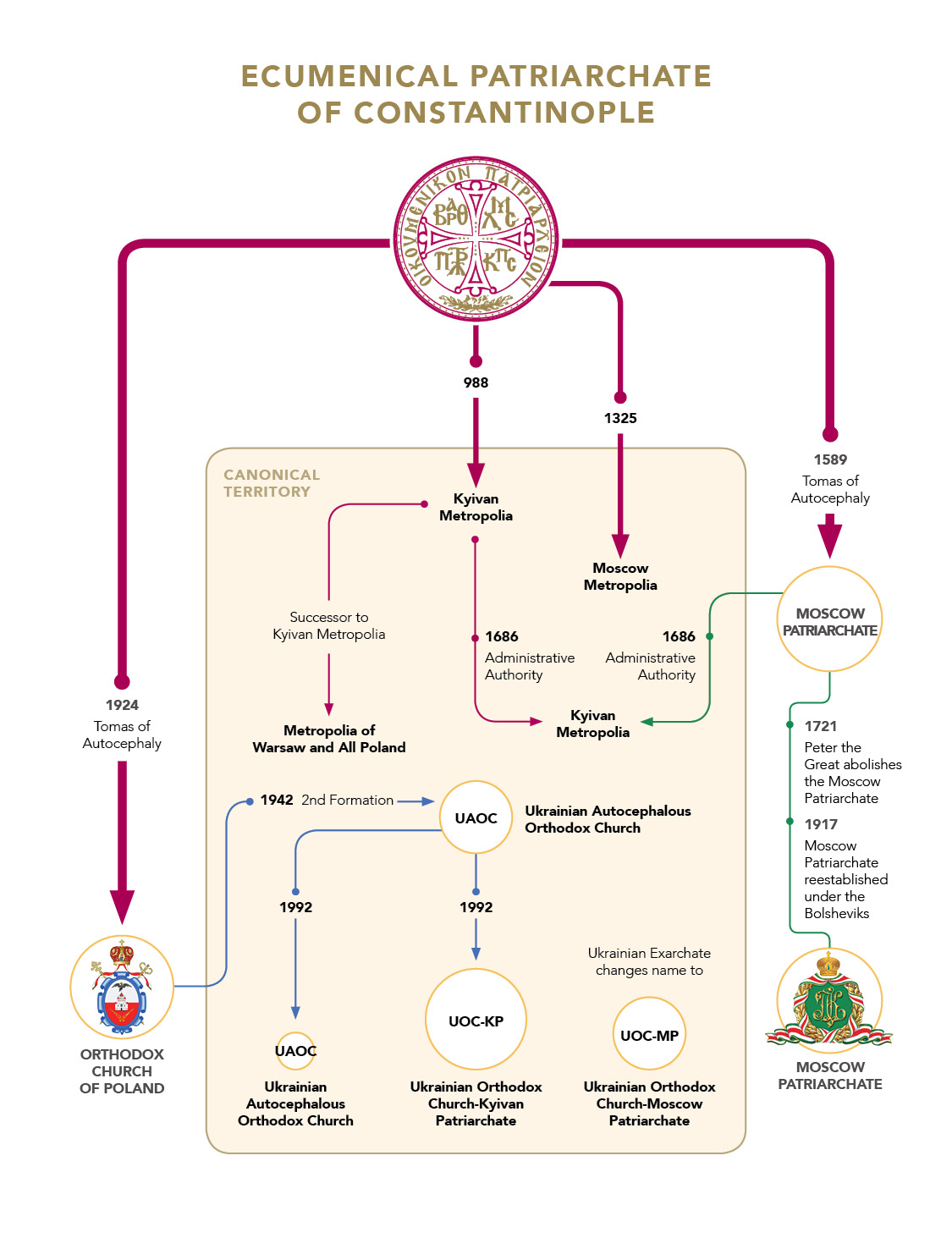 Ukraine is a mature independent nation-state.  It is a country of over 44 million people and the largest country in Europe proper, with a landmass of more than 223,000 square miles – roughly the size of the States of Colorado and New Mexico combined.  According to a 2016 survey conducted by the Razumkov Centre, 65.4% of the population of the Ukraine identified as being Orthodox (over 28 million people) – multiples larger than the combined Orthodox populations living in the United States, Canada, Mexico, Central America and South America.

In the modern era, the Orthodox Church has consistently fostered and supported autocephalous churches on the model of the mature independent nation-state.

It is important to remember that the institution of autocephaly is a unique Orthodox process deployed by the Holy and Sacred Synod of the Ecumenical Patriarchate to reinforce the unity of the Church.  It is an institution that highlights both the local church and our ecclesial unity across national and cultural borders.  Although it may seem counter-intuitive (i.e., how can localization of Church authority create greater unity), ecclesial unity has been preserved by granting mature local churches hierarchical independence and, thereby, preventing the hegemonic designs of others.

It cannot be disputed that these criteria are met in granting Ukraine autocephaly.

We conclude with a quote from Archbishop Daniel of the Ukrainian Orthodox Church, dated September 24, 2018:

In the past few weeks I have reviewed numerous articles, thoughts and opinions about the prayerful decision of the Mother Church of Constantinople to take appropriate action in order to resolve the anomaly of ecclesiastical division in Ukraine. It is interesting to observe how conveniently some of us tend to interpret the Sacred Canons and history of the Church without truly studying the reasons for the Canons coming into existence and historical events developing in different ages of the Church's growth and development. …  In my opinion, at this particular time of history, the only individual who has exhibited the will to imitate Christ and act with His intentions and through His teachings is His All-Holiness Ecumenical Patriarch Bartholomew.  The call from the Patriarch has consistently been to prayer, reflection, reconciliation and now to action that is based on the Sacred Scriptures and pure pastoral care... so, I would encourage people to pray, reflect, speak and work for the glory of God … .

Respectfully, on behalf of the Archons of St. Andrew of the Ecumenical Patriarchate,