Archons Sisson and Counelis Meet with Ukrainian MP at OSCE 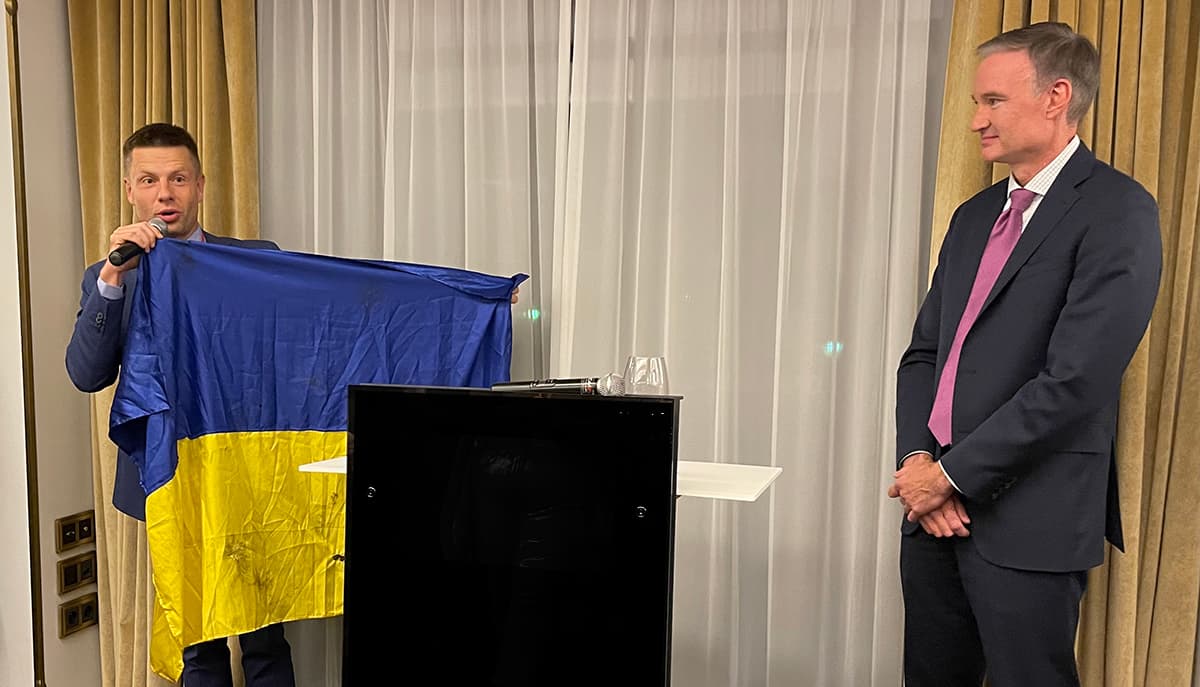 On September 27, 2022, Archons Franklin (Rocky) Sisson and Hon. Steven G. Counelis met with Oleksiy Goncharenko, a member of the Ukrainian Parliament, during the annual Warsaw Human Dimension Conference of the Organization for Security and Co-operation in Europe (OSCE) in Warsaw, Poland.

Goncharenko made a presentation at a reception that included Civil Society members, as well as the U.S. delegation at the OSCE conference, including Dr. Michael Carpenter, Ambassador of the United States to the OSCE.

During his presentation, Goncharenko displayed a Ukrainian flag that flew over Kyiv during the recent battles for the city. Bullet holes were clearly visible in the flag.

Archon Sisson commented: “The speech that was given by Oleksiy Goncharenko was both moving and inspiring. He spoke with deep passion about the Ukrainian people and their dedication to defeating Russia.”

“The presentation was a very moving moment,” remarked Archon Counelis. “Oleksiy Goncharenko left his country that same morning as Iranian drones were dropping bombs, and flew to Warsaw with a bullet-ridden Ukrainian flag. When he displayed that flag to those who were assembled at the U.S. Ambassador’s reception, all in attendance were visibly moved. It was a powerful moment of international diplomacy.”

In a subsequent meeting with Archons Sisson and Counelis, Goncharenko spoke of the importance of the words of paternal love and support that His All-Holiness Ecumenical Patriarch Bartholomew has extended to the suffering people of Ukraine, and of the Ukrainian nation’s gratitude to His All-Holiness for his granting of the Tomos of Autocephaly to the Ukrainian Orthodox Church on January 5, 2019.

On Wednesday, September 21, 2022, at a reception hosted by the Consul General of Ukraine in Constantinople, Roman Nedilskyi, on the occasion of the 31st anniversary of the independence of Ukraine, His All-Holiness Ecumenical Patriarch Bartholomew reiterated the sympathy and solidarity of the Mother Church with the war-torn Ukrainian people, who vigorously and heroically defend the territorial integrity of their country, and wished for peace to prevail soon for the sake of Ukraine and the whole of humanity.