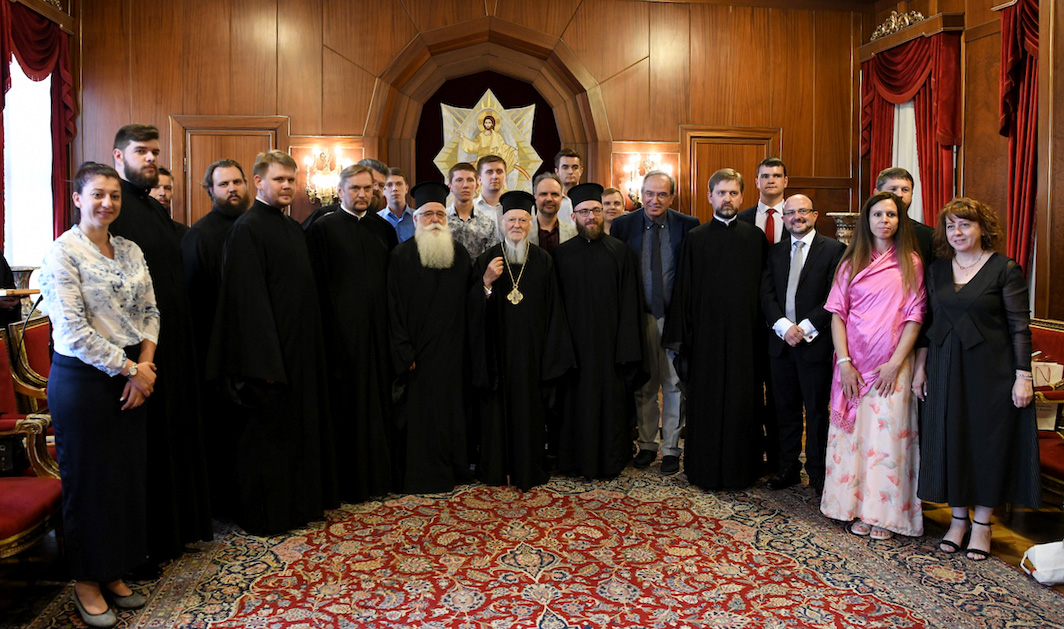 “Among Orthodox Christians, dialogue and the struggle for the protection of human rights is a duty that derives from the core of our faith,” Ecumenical Patriarch Bartholomew said in his speech after the Divine Liturgy, which he celebrated in the most venerable Patriarchal Church on Sunday, July 14, welcoming a large group of students from the Theological Academies and Seminaries of the Autocephalous Church of Ukraine, who participated in the two-day Training Program organized in Volos by the Academy of Theological Studies of Dimitriados and Almyros. The group of students, accompanied by their teachers from Ukraine as well as the Director, executives and associates of the Academy of Theological Studies of Volos, traveled to the city, led by Ignatios, the Metropolitan of Dimitriados and Almyros, in order to receive the paternal blessing of His All-Holiness.

“We are particularly pleased that the educational program, rich in teaching, courses and other training programs, concludes with a visit to the City of Constantine and the Venerable Center of Orthodoxy. In the person of this Director, Dr. Panteleimon Kalaitzidis, we congratulate the Academy of Theological Studies of the Holy Metropolis of Dimitriados for its contribution to theology, the promotion of dialogue and the encounter of Orthodoxy with the modern world through its many remarkable programs.”

In his speech, His All-Holiness referred in particular to the role and mission of theology and theologians in the modern world.

“Theology is always ‘theology in dialogue,’ an attempt to express the truths of faith in the language of a particular era. The theologian must feel the pulse of his contemporaries, in order for theology to be existential, ‘like a fisherman,’ as St. Gregory the Theologian said, “in accord with the model of the Apostles,” the Ecumenical Patriarch noted, and at another point in his speech, he emphasized: “It is obvious that theological work is particularly demanding. Theologians must be interactive and communicative, interested in ‘human affairs,’ sensitive to the vicissitudes of human freedom, and, in addition to challenges, to record in depth the positive perspectives of the civilization of the time. As it has been said, ‘the genuine theologian cannot despise education, science, art, philosophy that is the language of the spirit of every age. Whoever does not love education and culture, whoever does not have the desire to study, cannot really love theological study and the teaching of Christ.’ A model for the Orthodox theologian are the great Fathers of the Church, who are not a dimension of the past, but a fixed point of reference for ecclesiastical life and theology.”

“In this spirit, Orthodox Theology is presently giving its God-loving and philanthropic testimony to the great contemporary technological, economic, social, political, cultural, moral and religious challenges, and the associated threats to the sacredness and beauty of the human person. It opposes individualism with community and relationship, and opposes collectivization and the reduction of man to a measurable dimension and a material object with the freedom and uniqueness and absolute value of every human being. It emphasizes, in the face of religious fundamentalism, the peacemaking force and the peacekeeping mission of religion, and the necessity of interfaith dialogue, in accord with the principle: “No peace of civilizations without peace of religions. No peace of religions without a dialogue of religions.” For us as Orthodox Christians, dialogue and the struggle for the protection of human rights is a duty that derives from the core of our faith. With impressive clarity, our eminent spiritual father, Metropolitan Meliton of Chalcedon, outlined the meaning of the definition of Chalcedon for our philanthropic mission to all mankind: “The definition of Chalcedon is a true ‘charter of human rights,’ because it unites God to humanity and glorifies mankind in the divine life’ (Chalcedonia, p. 211).”

On the occasion of today’s celebration, during which the Church celebrates the sacred memory of the 630 Holy Fathers of the Fourth Ecumenical Synod in Chalcedon, His All-Holiness referred to the importance of this Synod and the important decisions it made.“

In addition to its important doctrinal decisions, the Fourth Ecumenical Council of Chalcedon set out 30 canons, of which the 9th and 17th canons concerning the clergy are of particular importance to the Church of Constantinople, as they delineate the privileged right of the Patriarch of Constantinople alone to receive, in a final and irrevocable manner, appeals to the See for disputes between the other Patriarchates and the other Churches, and especially the acclaimed 28th canon, which further ratified and clarified the third canon of the Second Ecumenical Council of Constantinople on giving to New Rome a throne of equal privileges with those of the throne of the Elder Rome, as well as the supreme jurisdiction of the Ecumenical Patriarchate for the overseeing of all areas outside the limits of particular ecclesiastical jurisdictions,” Patriarch Bartholomew said, and at another point in his speech he pointed out: “The temporal value of the dogmatic and canonical work of the Synod of Chalcedon is also evident today in inter-Orthodox and intercultural relations, and in the witness of the Orthodox Church and its theology in the modern world. The recent granting of the status of Autocephaly in Ukraine highlights the timeliness of the above decisions of the Synod regarding this important initiative of our Ecumenical Throne and its acknowledgment by the other Orthodox Autocephalous Churches on the basis of respect for the unchangeable provisions of that Synod.”

Beforehand, Metropolitan Ignatios of Dimitriados and Almyros, the Director of the Academy of Theological Studies of Volos, Dr. Panteleimon Kalaitzidis, and Vladimir Vakin, Rector of the Orthodox Theological Academy of Volyn, Ukraine spoke.

The Metropolitan of Demetriados said in his speech: “After your great and very important decision to grant Autocephaly to the Orthodox Ukrainian people, as you had the right to do, we had the idea to ask the Board of Directors and the Director of the Academy to create conditions for meeting with our brothers, the new Church, Ukrainian Orthodox, firmly believing that this could make the unity of Communion with the common Cup more genuine. Thus a program addressed to the theologians, professors and students of the ecclesiastical and theological schools of Ukraine was developed.” At another point he noted: “From the first moment, we had decided to come to the Ecumenical Patriarchate to gain your blessing at the end of the seminar. And, behold, after fifteen days of theological courses and pastoral experiences, we are in your presence and we are glad that we will receive from you the Patriarchal blessing to return to the homeland. Your All-Holiness, we consider this effort a ministry for the unity of the Orthodox Church. We want to make the effort work so that we can repeat similar actions for the new Orthodox Church of Ukraine, in order to further strengthen ties.”