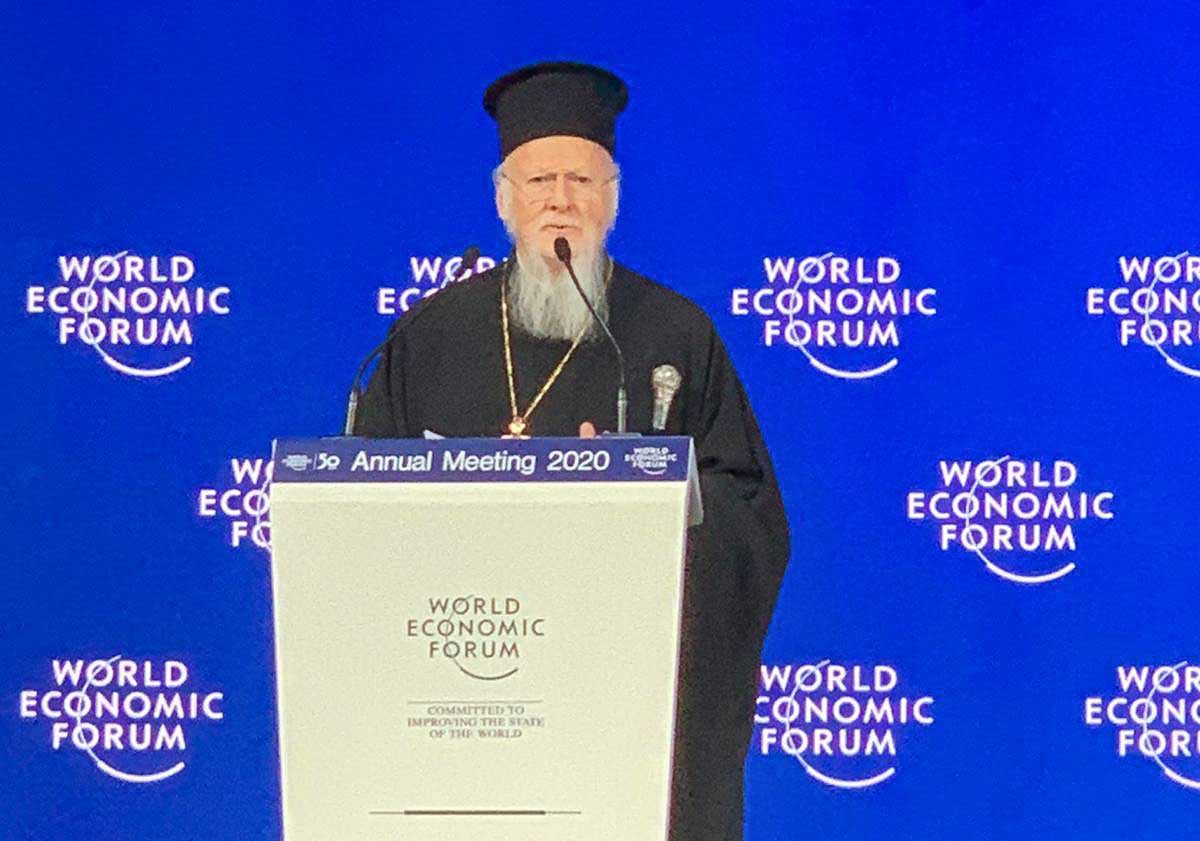 The role of religious faith in creating a sustainable world with social cohesion and the value of dialogue as a key instrument in this regard, as well as the condemnation of all forms of violence and religious intolerance, were the key points of the keynote address by His All-Holiness Ecumenical Patriarch Bartholomew, which took place today, in the afternoon of Wednesday, January 22, 2020, at the 50th World Economic Forum held in Davos, Switzerland. His All-Holiness, who was invited by the organizers, has been in Davos since January 20, and has already participated in various Forum Committees, as well as in parallel events held on the occasion of this year’s anniversary event in Davos.

His address in the plenary session

“Faith can achieve its mission and fulfill its role of cohesion and sustainability through dialogue and witness to the world,” the Ecumenical Patriarch noted in his speech in English, adding: “Throughout our almost three decades of Patriarchal ministry, we have striven for the promotion of dialogue, which we consider to be the most effective means for addressing problems. Dialogue is a gesture and source of solidarity; it leads to the overcoming of prejudices and mistrust; it promotes mutual familiarization and appreciation; and it builds respect for otherness.”

His All-Holiness discussed the tragic fact that many people today tend to identify religion with terrorism, war and intolerance.

“It is tragic that many people tend today to identify religion with terror, war, and intolerance. Almost every day we learn of violence in the name of religion. This tendency to identify religion with its negative aspects is unfortunately reinforced today through the misinterpretations of religion, which circulate especially among progressive intellectuals. Ignorance, intolerance and violence are the failure and not the essence of religion. They are the marks of fundamentalism and extremism, which regard their own ideology and interests as truth that must be imposed upon others. Yet, our conviction – as we have repeatedly declared throughout our tenure – is that any crime supposedly committed in the name of God is actually a crime against God. This is why we work to combat religious fundamentalism – ‘this expression of morbid religiosity,’ as was stated in the Encyclical of the Holy and Great Council of the Orthodox Church (Crete, June 2016, § 17).”

In another part of his speech, which was attended by personalities from all over the world, His All-Holiness emphasized that peace and justice in the world cannot exist without the contribution and cooperation of religions.

“It is overly utopic to expect that solidarity and social cohesion can be established through globalization, economic progress, improved living standards, science and technology, digital communication and the Internet. A world of peace and justice cannot exist without the contribution of the great spiritual powers of humanity – that is, of religions and their encounter and cooperation. We have also persistently underlined that understanding other people’s beliefs and values is an indispensable precondition of establishing dialogue and coexisting peacefully. Faith strengthens the commitment of human action, and it enlarges our witness for freedom and justice, even providing support to our efforts when they appear to be at an impasse.”

His All-Holiness noted that in this context, the Ecumenical Patriarchate took the lead in ecumenical organizations, such as the World Council of Churches, and supported and promoted bilateral dialogues with non-Orthodox Christians, as well as with Muslims and Jews in the Middle East and internationally.

“Such dialogue does not imply abandoning or betraying one’s belief or tradition, but instead encourages learning to live in solidarity with all people, with whom we share this world. We believe that the appropriate response to our present multifaceted crisis is the development and establishment of a culture of solidarity. Our conviction is nourished by the very essence of the Gospel.”

He even recalled that the Ecumenical Patriarchate, in light of the financial crisis, had declared 2013 as a “Year of Global Solidarity,” emphasizing the need for initiatives to safeguard the right of every person to enjoy the essential goods of life.

The Ecumenical Patriarch then stressed that the road to the future is a common journey for all of us.

“We need one another; we need common goals; we need collaborative efforts. We are called to build bridges based on love and understanding, and not to construct walls of division and exclusion based on fear and ignorance. The Ecumenical Patriarchate invites all of you to join in these endeavors.

At another point, His All-Holiness expressed his reservations about the characterization of modern Europe as “post-Christian.”

“Europe’s secularized present cannot be separated from its past, which is inspired and formed by a cultural heritage centered around Christianity. We must accept that the retreat of this Christian consciousness in Europe ultimately has a negative impact on Europe’s identity and self-understanding.”

Referring to the end of the Cold War period in 1989 and the creation of a polycentric world, Ecumenical Patriarch Bartholomew pointed out:

“Today religions are called to develop and give prominence to their peace-making power and humanistic principles, their precious spiritual and moral heritage, as well as their deep anthropological knowledge, all of which strengthen our engagement with and struggle for the protection of human dignity. Faith and religion can play a vital role in raising awareness, advancing dialogue and fostering collaboration among people on contemporary global challenges.

“And what is the place and role of the Orthodox Church in face of the current crisis? In many geopolitical contexts worldwide, Orthodoxy was, is, and will continue to be a minority religion with a universal message and a legacy of a long-standing historic presence. In regions such as the Middle East, South-Eastern Europe, and the Balkans, the Orthodox Christian faith has shaped the religious landscape for centuries, or even millennia. The challenges in this context are real and urgent. In the Middle East in particular, the survival of Christianity hangs in the balance. During the war in Syria and the uprising of the so-called ‘Islamic State,’ news reports and articles regularly reminded us of the reality of Christians in the Middle East and their continuous struggle to survive in the very region where Christianity was born. It is important for us here to understand that these Christians are more than just a historical link to the world of the Gospel. They are the heirs to a unique spiritual and cultural legacy and symbol for the value and respect of religious diversity worldwide.”

The Ecumenical Patriarch concluded, among other things, that in the face of the contemporary international crisis, all religious communities must renew their message and act as a positive challenge for individuals and peoples and offer an alternative model of life in a globalized world, “which bestowed humanity with precious gifts, but at the same time seems to push people to live for themselves, ignoring the others, with whom they have to share the world. In this sense, the faithful can become more humanist than humanist themselves, because the struggle for social cohesion and the protection of the integrity of creation is not just a moral imperative, but a commandment of God.”

[Read the original English text of the Ecumenical Patriarch’s speech]

Previously, His All-Holiness had a private meeting with the President of the World Economic Forum, Borge Brende, who offered him a commemorative silver disc and publications for the Ecumenical Patriarchate. Mr. Brende is a former Minister for the Environment and later the Minister of Foreign Affairs of Norway.

Address at the “Interfaith Alliance”

Earlier, His All-Holiness participated in a joint press conference with other religious leaders, and at noon delivered a speech organized by the Interfaith Alliance, of which His Eminence Metropolitan Emmanuel of France is a member. In his speech, His All-Holiness, who spoke in English, referred to some of the negative aspects of technological progress and the consequences they have on people’s lives. He reiterated the important role of Faith, which, he said, reinforces our commitment to human action and broadens our witness of freedom, justice and peace.

“Of course, criticism against the deification of technology does not necessarily mean the devaluation of the beneficial works of scientific and technological progress. For, such a rejection would actually equate to us denying the very act of breathing. Science and technology have a human dimension and contribute to the solution of humanity’s problems today. Nevertheless, nothing amplifies the arrogance of contemporary man as much as faith in almighty science and technology. The future, though, does not seem to belong to the self-ordained ‘man-god’ (ἀνθρωποθεός), who as a new ‘Prometheus’ ignores or even abolishes limits and measures, as well as destroys the conditions of life on the earth. Real progress does not exist when the human person and his freedom are being undermined and his world is being destroyed.”

“We reject the cynical phrase ‘There is no alternative.’ We reject the claim that non-conformity to the commandments of globalization and to the ‘autonomy of the economy’ leads inevitably to the expansion of poverty and to uncontrollable societal developments and conflicts. From our perspective, the magic words are ‘solidarity’ and ‘cooperation.’ There is neither dilemma nor doubt of any kind when it comes to the need of common action between technology, politics, economics and religion, in order to address the problems that are to a great extent due to their autonomous function—exclusively on the basis of their own specific principles and criteria. As long as these powers continue to ignore one another, they can never truly benefit humanity. They all have to serve man and his world.

“In fact, while technological developments are important elements, they are not the essence of a civilization. A civilization is judged by whether or not its final point of reference is the human person, in relation to his true divine destiny and the protection of his world.”

[Read the original English text of the Ecumenical Patriarch’s speech]

In the afternoon, His All-Holiness visited the Türkiye Varlık Fonu Pavilion, where he was welcomed by its President, Zafer Sönmez, executives of the organization, and entrepreneurs.

On Tuesday, January 21, Ecumenical Patriarch Bartholomew participated in a Climate Change Dialogue, in which he referred to the Ecumenical Patriarchate’s initiatives over the last 30 years to raise the global community’s awareness of the need to protect the natural environment and safeguard the creation of God. His All-Holiness pointed out, among other things, that there is no opportunity or time to shift responsibility and there is no justification for any delay, and urged everyone to change his or her attitude and understand the urgency of the issue of climate change and the impact of our actions in Creation, as well as upon other people.

The speech of the Ecumenical Patriarch was attended by Ms. Mareva Grabowski-Mitsotakis, the wife of the Prime Minister of Greece, Kyriakos Mitsotakis, and the Ambassador of Greece to Switzerland, Hara Skolarikou.

On the evening of the same day, His All-Holiness gave a speech at a dinner attended by religious leaders who were present at the proceedings of the World Economic Forum.