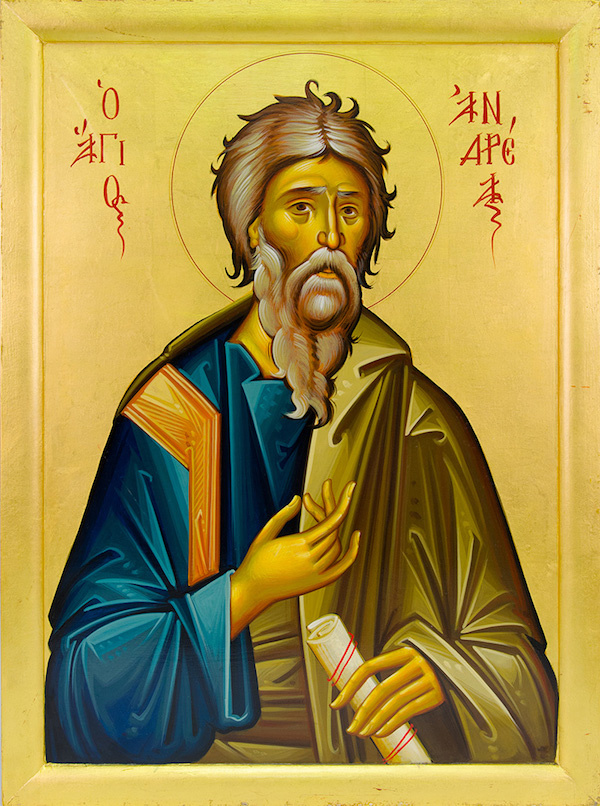 Andrew was one of the twelve Apostles and is known as the "Protocletus" (the First Called) because he was the first Apostle to be summoned by Jesus into His service. Andrew and his brother Peter made their living as fishermen on the Sea of Galilee. Both men became Apostles, and while Peter symbolically came to represent the Church of the West, Andrew likewise represents the Church of the East.

According to ecclesiastical tradition, Andrew began his missionary activity in the Provinces of Vithynia and Pontus on the southern shores of the Black Sea. Later he journeyed to the City of Byzantium and founded the Christian Church there, ordaining the first Bishop of Byzantium, Stachys, who was one of the 70 disciples of the Lord.

In one of his several missionary journeys to Greece, Andrew visited the City of Patras. Through his preaching and the miracles of healing he performed, in the name of Jesus, many persons were converted to Christianity. Among those healed was Maximilla, the wife of the Roman Proconsul, Aegeates. Seeing this miracle of healing, Stratoklis, the highly intellectual brother of the Proconsul, also became a Christian, and Andrew consecrated and enthroned him as the first Bishop of Patras.

The Crucifixion Of Saint Andrew

These conversions to the Christian Faith by members of his own family infuriated the Proconsul Aegeates, and he decided, with the urging of the idolators who advised him, to crucify Andrew. The crucifixion was carried out on an X-shaped cross with the body of the Apostle upside down so that he saw neither the earth nor his executioners, but only the sky which he glorified as the heaven in which he would meet his Lord. His body was tenderly removed from the cross by Bishop Stratoklis and Maximilla, and buried with all of the honor befitting the Apostle. Soon countless numbers of Christians made their way to Patras to pay reverence to the grave of Andrew, and when Aegeates realized that the man he had put to death was truly a holy man of God his conscience became so tormented that he committed suicide.

The deeds and preaching of St. Andrew became known in all parts of the world. According to tradition a part of the remains of St. Andrew were taken to Scotland, and he was chosen as the Protector of the Scottish people. The Cross of St. Andrew also adorns the British flag where it was placed after the union of Scotland and England. The skull of St. Andrew was kept in Patras until the year 1460 when Thomas Paleologos, the last ruler of the Morea brought the skull to Rome. In 1967, under the orders of Pope Paul, the skull was returned to Patras with al of the pomp and dignity of the Papal State.

The Call Of Saint Andrew

Today the voice of St. Andrew continues to call on all Christians, especially the Greek Orthodox Christians throughout the world. His unstilled spirit beckons across the centuries proclaiming: "The Saviour of the world has come! He is the Christ, the Son of God!" This is the call of St. Andrew to all men for "Jesus Christ is the same yesterday, today and tomorrow." (Hebrews 13:8)