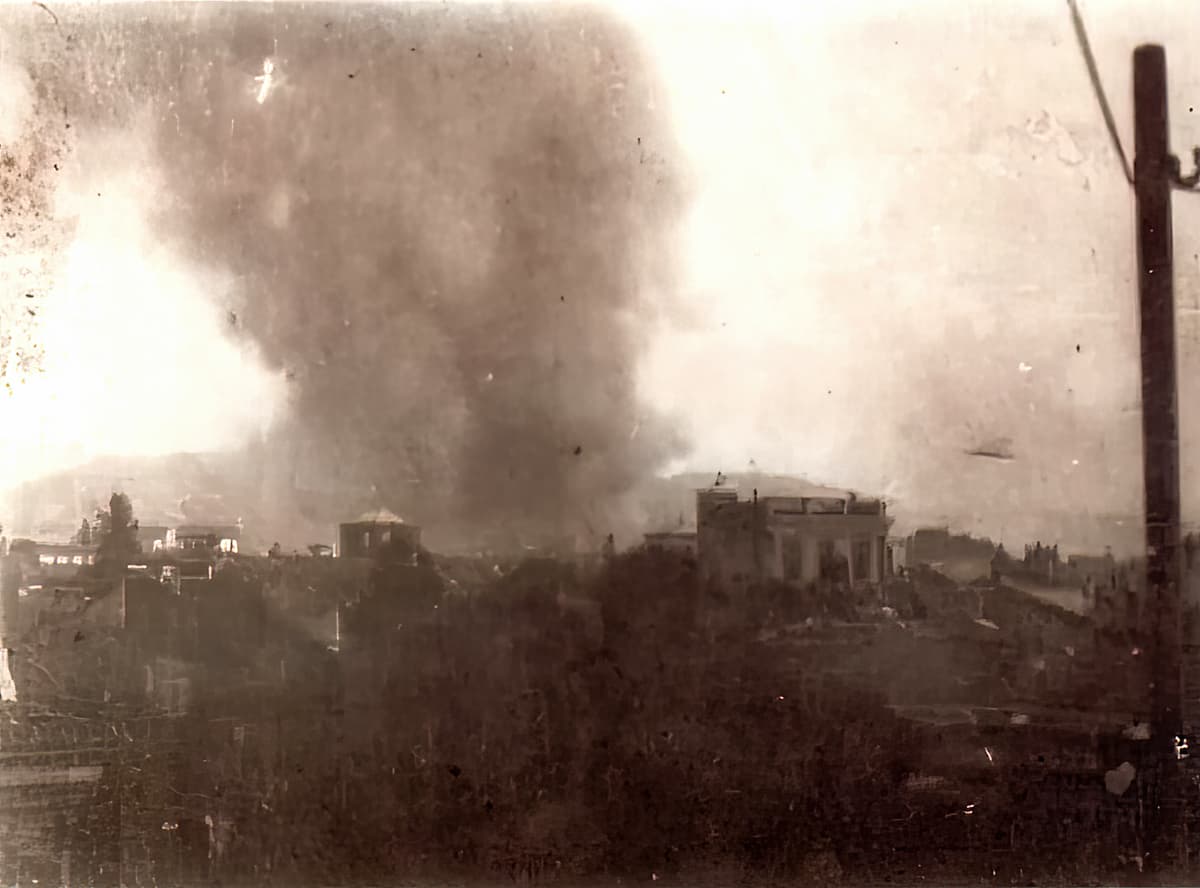 Remembering Smyrna and the Great Catastrophe a Century Later

The article below is a somber and sorrowful reflection of the Christian genocide that took place 100 years ago in Turkey. Eternal be the memory of those victims who lost their lives in the Great Catastrophe of Asia Minor.

One of the last diplomats to leave Smyrna after the Turks set the great Anatolian port city ablaze in September 1922 was the US Consul General to Smyrna, George Horton. Reflecting on the slaughter and depravity committed by the Turkish forces tasked by Mustafa Kemal, the leader of the Turkish nationalist movement and founder of the Turkish Republic, to destroy Smyrna’s Greeks and every physical semblance of their more than three-thousand-year presence in Asia Minor, Horton wrote that “one of the keenest impressions which I brought away from Smyrna was a feeling of shame that I belonged to the human race.” The carnage and literal holocaust that Horton observed have been seared into Greek historical memory as the “Great Catastrophe” (He Megali Katastrophe)—a term that denotes the genocide, expulsion, and erasure of the Greek people from their ancient homelands in Asia Minor and Eastern Thrace. This traumatic event is remembered as the greatest tragedy and humanitarian disaster to befall the modern Greek world. 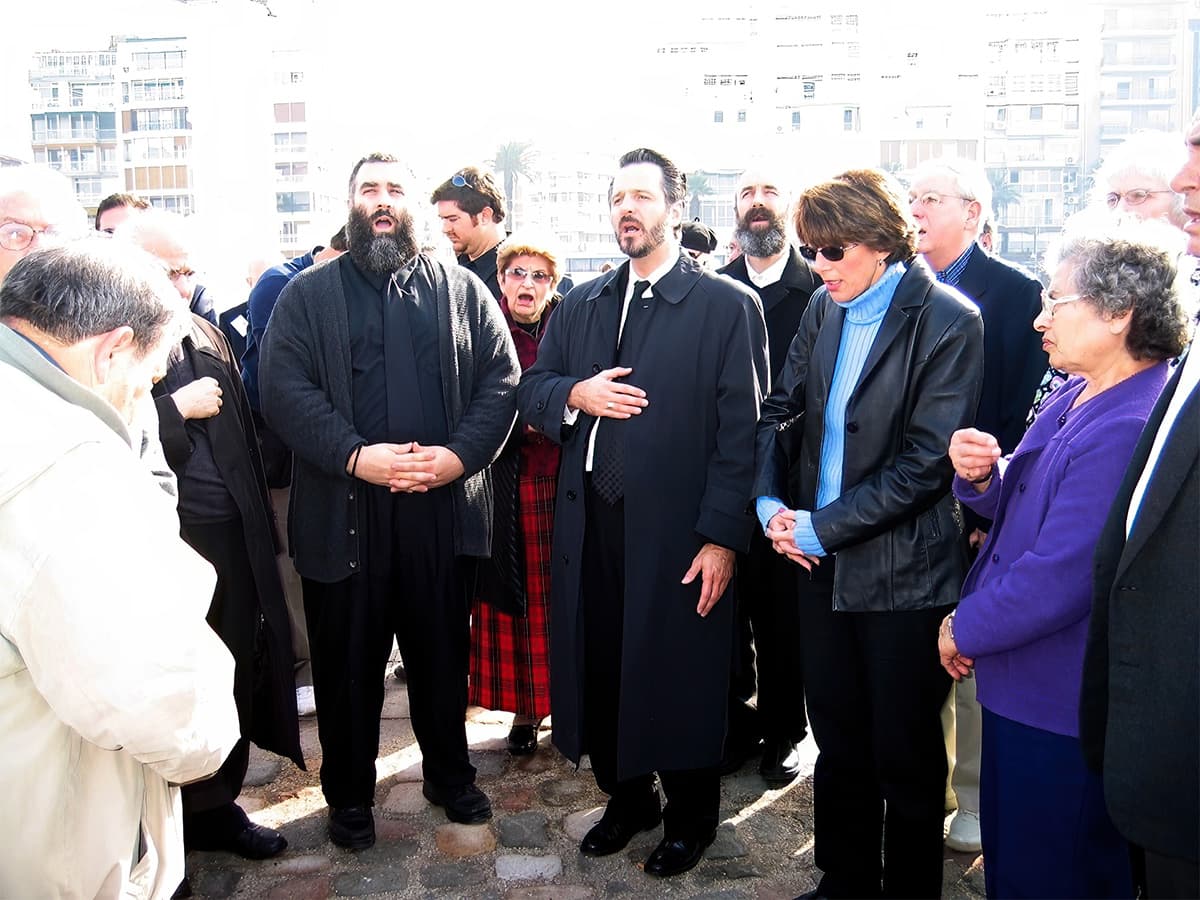 Archons offer a trisagion on the quay in Smyrna at the site of the Asia-Minor Catastrophe.

Before the entry into the First World War on the side of Germany in 1914, the Ottoman Empire had a Greek Orthodox population of 2,230,000 people. Greeks, in fact, made up the largest Christian community in an empire in which the Arab, Armenian, Assyrian, Greek, and other native Christian communities still comprised more than a quarter of the empire’s total population. Even after centuries of Islamization and Turkish assimilation of the originally entirely Christian region, approximately 1,500,000 Greeks lived in Asia Minor and 730,000 Greeks lived in the empire’s European territory, of whom nearly 350,000 resided in Constantinople (the largest ethnic group among the 900,000 residents of the imperial capital). Of Smyrna’s approximately half-million inhabitants, the city’s 320,000 Greeks dominated the urban center’s cultural and economic life and built for themselves and their city dynamic international connections through global trade, as well as vibrant domestic networks that linked the wide-spread Greek communities throughout Asia Minor. Before its destruction by the Turks, Smyrna was the largest urban center in Asia Minor and one of the most cosmopolitan and prosperous cities in the world, known to Westerners as the “Jewel of the Mediterranean.”

This remarkable cosmopolitan Smyrna came to an abrupt, violent end with the victory of Kemal’s Turkish nationalist forces against the Greek army in Asia Minor in late August 1922. Following a three-year military struggle—initially fought at the behest of Greece’s World War I allies (Britain, France, and the United States), as much as for Greece’s own national aspirations in Anatolia—to enforce on the resistant Turkish nationalists the peace treaty that ended the First World War with the defeated Ottoman Empire, the Greek army was routed and forced to withdraw from Asia Minor. On the heels of the retreating Greek army, Kemal’s forces entered Smyrna on September 9, 1922, and the Great Catastrophe began to unfold.

During the next few days, expanding numbers of Turkish troops occupied the entire city and cut off all routes into and out of Smyrna, trapping the city’s native Greek population and the more than 100,000 Christian refugees who had fled from their homes in the interior of Asia Minor to Smyrna, a flight to survive the advancing Turkish army. Indeed, throughout Western Asia Minor hundreds of thousands of Greek civilians were fleeing their villages and towns to the Aegean’s coastal cities to escape the Turks.

In Smyrna, beginning on September 13, the Turks surrounded the city’s Armenian district and began a massacre of the community’s 25,000 inhabitants, setting fire to and incinerating the entire Armenian quarter. On the same day, the Turks implemented their plans for the destruction of the city’s Greeks. Whereas the Turks had annihilated the Armenians in a few days, the much larger Greek population required more preparation and effort to eradicate. After nearly two weeks of carnage, rapine, looting, and terror, Kemal’s troops, joined by jubilant local Turkish civilians, had meticulously and thoroughly burned Smyrna to the ground. The entire Greek district was destroyed. Not a single Greek building—no home, church, school, shop, office, factory, business, hospital, hall—survived the massive conflagration. In contrast, Smyrna’s Turkish quarter and population were completely untouched by the carefully directed and oil-fueled flames of the Turks.

For days as the city burned more than 400,000 Greeks crammed Smyrna’s waterfront to escape from the inferno, literally, a holocaust. An international armada of American, British, French, and Italian warships and their forces remained anchored in Smyrna’s port, under orders from their governments to do nothing. These Western observers watched the Great Catastrophe of the burning and massacre of Smyrna’s Greek and Armenian Christians.

The tortured, abandoned Greeks were ultimately rescued only by a massive private humanitarian effort that was initiated and led by an American Protestant pastor who was on the scene of the disaster. Pastor Asa Jennings pooled together and used Greek merchant boats and Japanese ships in the Aegean to transport survivors to safety in Greece. Thanks to his efforts, some 300,000 Greeks were saved before the end of September. However, the rescue could not save the lives of the more than 100,000 Greeks who had or would soon be massacred, incinerated, or taken captive and forced onto death marches by the Turks. The Turks’ destruction of Smyrna, their mass murder of the city’s Christians, and the tragic exodus of the tormented and terrorized survivors were reported at the time by the shocked international media as an unprecedented humanitarian disaster, a colossal atrocity, a great catastrophe of biblical proportions.

Although the obliteration of Smyrna and the decimation and erasure of the city’s Greek population is the most well-remembered event of the Great Catastrophe, it was just one of many crimes committed by Turkey during that country’s nearly decade-long genocide against its own Christian peoples. In fact, Turkey’s annihilation of its Christians—Armenians, Assyrians, Greeks, and others alike—marked the twentieth century’s first large-scale, systematic, state planned and implemented genocide, establishing a model that would inspire and be replicated by other extremist states throughout the remainder of the century. Beginning in 1914, the First World War provided the ruling Turkish nationalists—who had seized control of the Ottoman Empire earlier and whose commitment to “Turkify” the empire would eventually be continued and completed by the Kemalist regime after World War I—the opportunity to eradicate all non-Turkish, non-Muslim peoples. One of the first senior diplomats to comprehend and document the Turks’ genocidal objectives and actions was the much-respected US Ambassador to the Ottoman Empire from 1913 to 1916, and eyewitness to the Armenian and Greek Genocides, Henry Morgenthau. He reported to Washington that “the Turkish government’s passion for Turkifying the nation seemed to demand logically the extermination of all Christians.”

The Great Catastrophe of Smyrna should be recalled at this centennial moment of reflection both as a singular, unprecedented humanitarian disaster and as part of a larger crime against humanity—a genocide against Christians. Between 1914 and 1923, two Turkish nationalist regimes which led the Ottoman Empire and the Turkish Republic, respectively, murdered 750,000 to 900,000 Greeks and ethnically cleansed through forced expulsions nearly 1,200,000 other Greeks, destroying completely their presence in their own ancestral lands of Asia Minor and Eastern Thrace. After 1923, Turkey’s surviving Greek population, whose security and rights had been officially guaranteed by the international Treaty of Lausanne, had been reduced to 120,000 people in Istanbul and 15,000 on the islands of Imbros and Tenedos. Today, after a century of continuous and egregious violations by the Turkish state of its obligations under Lausanne, the Greek Orthodox community of Turkey numbers fewer than 2,000 people. Lest we become complicit in the erasure of Hellenism and Christianity from the ancient lands in which both took root thousands of years ago, it is incumbent upon us to learn the history of the Greek people and Orthodox Christianity, and to never forget the Great Catastrophe. After all, the Great Catastrophe of Turkey’s Greek Orthodox Christians was, in fact, like the destruction of Turkey’s Armenian and Assyrian Christians, a catastrophe for all humanity. The event established the template for genocide and ethnic and religious cleansing that continued throughout the twentieth century and up to the present.