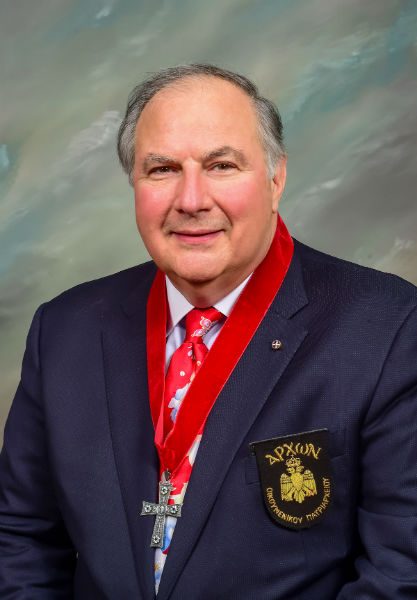 Anthony J. Limberakis, MD, an Archon of the Ecumenical Patriarchate since 1987 and a member of the Archon National Council, the governing board of the Order of St. Andrew since 1988, has served as National Commander of the Order of Saint Andrew the Apostle, Archons of the Ecumenical Patriarchate since 1998. A 1975 graduate of the University of Pennsylvania (BA, MA) and 1978 graduate of Duke University School of Medicine, he is a practicing radiologist in Philadelphia, Pennsylvania and a member of the radiology faculty of the Thomas Jefferson University Sidney Kimmel Medical College.

Active in the Greek Orthodox Church, Dr. Limberakis serves as the National Commander of the Order of St. Andrew, an organization comprised of the leading Orthodox churchmen in the United States whose mission is to defend and support the Ecumenical Patriarchate of Constantinople, the spiritual center of the world's 300 million Orthodox Christians located in Istanbul, Turkey. To be invested as an Archon of the Ecumenical Patriarchate is the highest honor a layman may achieve in the Orthodox Church.

The Ecumenical Patriarchate, the Spiritual Center of worldwide Orthodoxy, is not able to exercise fundamental human institutional rights and religious freedom due to the restrictive policies of the government of the Republic of Turkey. It is in this milieu of state sponsored religious repression that the continued existence of the Ecumenical Patriarchate is threatened. Under the leadership of Limberakis, the Archons in the United States have initiated an assertive, multifaceted religious freedom project enlisting the assistance of the federal government of the United States, the state legislative bodies of each of the 50 states of the United States, the European Union, the European Court of Human Rights and the Organization for Security and Cooperation in Europe (OSCE) to convey the urgent message to the Turkish government to cease and desist the policies that constrict religious freedom, not only for the Ecumenical Patriarchate, but for all religious minorities including the Jewish, Roman Catholic and Protestant communities of Turkey. The Order supports Turkey's candidacy to the European Union so long as it embraces the religious freedom standards of the EU and the Copenhagen Criteria.

In November 2009, Ecumenical Patriarch Bartholomew and then Archbishop Demetrios presented the Athenagoras Human Rights Award, the highest distinction of the Orthodox Church in America, to Limberakis in New York City for his leadership in fighting for religious freedom for the Mother Church, the Ecumenical Patriarchate of Constantinople. In June 2009 His Beatitude Patriarch Theophilos of Jerusalem named him the Commander Cross-bearer (Stavrophoros) of the Order of the All-Holy Sepulcher Cross-bearers.

Limberakis is a current member of the Archdiocesan Council of the Greek Orthodox Archdiocese of America, and past member of the Board of Trustees of Hellenic College/Holy Cross School of Theology and has served on the governing board of several Greek Orthodox churches in the Philadelphia area. In May 2002, Limberakis received an Honorary Doctorate Degree in Humanities from Hellenic College, Brookline, Massachusetts, for his professional and community leadership. In May, 2000 he received the Ellis Island Medal of Honor in recognition of his contributions to the Greek American community.

Active at the Duke University Medical Center, Limberakis has served on its Board of Visitors and was past president of the Duke Medical Alumni Association and its major gift organization, the Davison Club. In addition, he has served as a member of the Medical Alumni Council and as chairman of its Strategic Planning Committee, which provided the blueprint for the reorganization and revitalization of the Medical Alumni Association. He has been awarded the Charles A. Dukes Award, Duke's highest recognition for volunteer service to the University and is a member of the Founder's Society and the Century Cub. In November 1999, Limberakis was the recipient of the Duke Medical Center Distinguished Service Award that is given periodically to an alumnus who has demonstrated exemplary service to the Medical Center and School of Medicine.

In March 2015, Limberakis was conferred the position of Distinguished Fellow of the Oxford Centre for the Study of Law and Public Policy at Harris Manchester College of the University of Oxford.

Limberakis, born in 1952 in Fresno, California the son of the late Rev. John A. Limberakis and Elizabeth Constantine Limberakis, served as a page in the United States Senate while in high school, and earned both his bachelor's and master's degrees in political science at the University of Pennsylvania in 1975. After graduating medical school from Duke in 1978, he completed his medical internship at the Graduate Hospital of the University of Pennsylvania and his residency in diagnostic radiology at the Thomas Jefferson University Hospital in 1983. He is married to Dr. Maria A. (Borden) Limberakis, a family practitioner, and together have three adult children, John, Anthony (Kathryn) and Elizabeth and three grandchildren, Dakota and Anthony (John), Evangeline (Anthony). 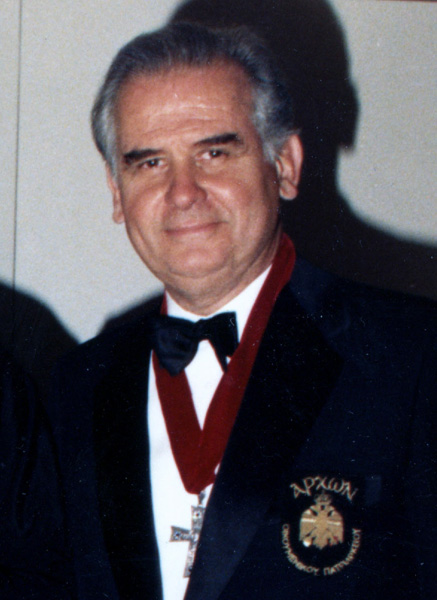 A graduate of New York University and NYU College of Dentistry, he received his postgraduate training in the field of Orthodontics from Colombia University. After graduating from Dental school he was commissioned as Captain in the U.S. Air Force Dental Corps.

Doctor Philip was a professor of Orthodontics at Fairleigh Dickinson University's graduate department, and served as Director of the Cranio-Facial Anomalies and Cleft Palate Programs and was Chairman of the department of Orthodontics.  Doctor Philip was Vice Commander prior to his appointment as National Commander by Archbishop Iakovos of blessed memory.  Among the highlights of his tenure were the sponsorship of the New York Philharmonic Benefit Concert at Lincoln Center highlighting the Ecumenical Patriarchate (1992) and the PBS production of “The Concert for Peace” featuring Nana Mouskouri (1997) that took place during the Holy Visitation of Ecumenical Patriarch Bartholomew to the United States, a concert which was broadcast throughout the United States.

Beloved husband of Irene for 59 years, the devoted father of Katherine and husband Dr. Chris Kojanis and son Chris Philip Jr., Doctor Philip fell asleep in the Lord in 2016. 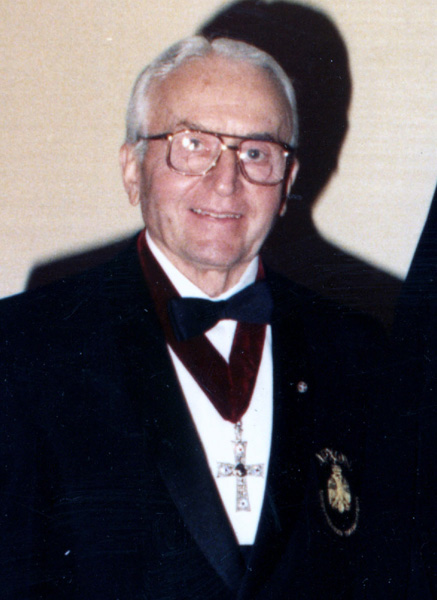 A longstanding and respected churchman in Philadelphia, Dr. Anthony G. Borden succeeded Pierre DeMets as National Commander in 1976 when he was appointed by Archbishop Iakovos of blessed memory.

Born and raised in Heraklion, Crete and having served as a decorated WWII veteran in the army of the Hellenic Republic as a physician, Doctor Borden furthered his medical training in the field of radiology in the United States at Harvard University, Bellevue Hospital, NY and the University of Pennsylvania, before entering private practice in Philadelphia.

Along with his wife Lillian, they raised two children (Maria, a family physician married to current National Commander Anthony J. Limberakis, MD and George, a practicing attorney in Washington, DC). During his tenure as National Commander, the religious freedom persecution perpetrated by Turkey and constricting the Ecumenical Patriarchate was publicized in the United States for the first time by the Order.

In addition, the inaugural Athenagoras Human Rights Award was established which provided an extraordinary instrument to honor individuals and organizations in the field of human rights, while simultaneously focusing on the religious freedom crisis asphyxiating the Ecumenical Patriarchate. In 1989 Doctor Borden himself received the Athenagoras Human Rights Award for his visionary contributions. 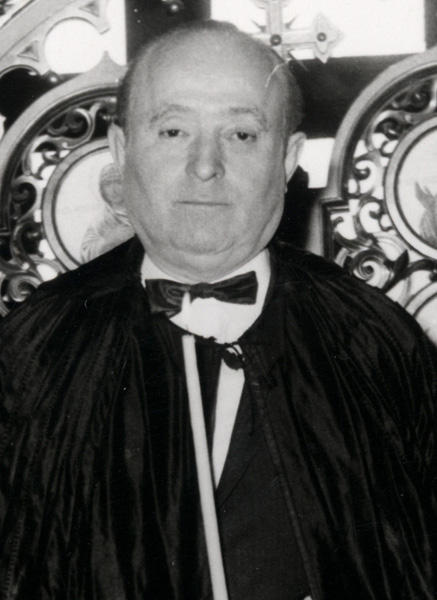 Pierre De Mets (Panagiotis DeMetreou) was the first National Commander of the  Order of Saint Andrew, then known as the Knights of St. Andrew. He and Patriarch Athenagoras of blessed memory together envisioned an Order of outstanding laymen in the Archdiocese of the Americas, and in 1966 this dream was realized. Pierre De Mets was appointed for life as the Grand Commander by His All Holiness Patriarch Athenagoras.